Rock icon and musical theatre star Jett Pangan will take on the title role, also known as “The Demon Barber of Fleet Street”, for Atlantis Theatrical’s 2019 Manila production of Sweeney Todd. It will mark Jett’s first musical in five years, having last appeared on the musical theatre stage as Lord Farquaad in Shrek the Musical. Jett has appeared in numerous musicals for Atlantis, including Next to Normal, Nine, Rock of Ages, Urinetown, and tick, tick…BOOM!

Jett says, “As a long-time Atlantis Productions ‘baby,’ I’ve had nothing but full trust in Direk Bobby Garcia each time he calls on me for a project.” From a loving husband and father of a dysfunctional family in ‘Next To Normal,’ to a pint-sized flamboyant dictator in ‘Shrek the Musical,’ it’s been a wild, fun journey through the years that has also blessed this singer in a rock band with tools to further improve his craft.  Nonetheless, signing up for a new theatrical mission is always a jump into the unknown, whether we’re talking fresh material or a classic.” 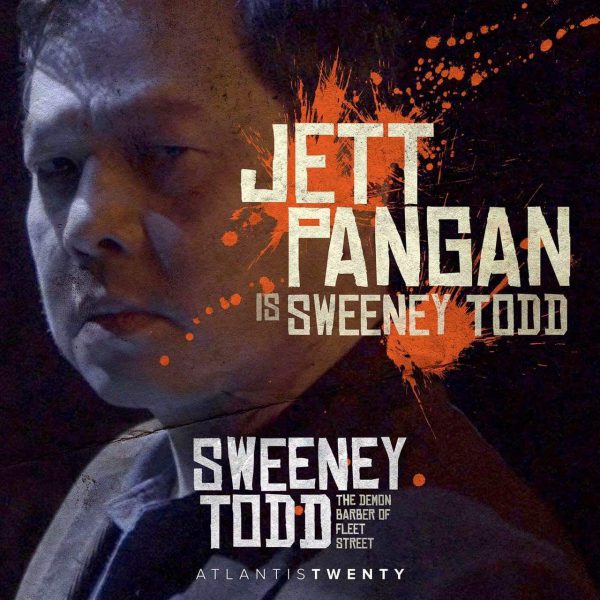 He adds, “Honestly, ‘Sweeney Todd’ is a role I never thought would come my way… and it is quite daunting. Stephen Sondheim’s genius for odd meter music flowing like a dark stream of consciousness is something not to take lightly, to say the least. I’m looking forward to another wild, fun journey with Atlantis as they celebrate 20 years.”

Bobby Garcia says, “Jett was the only person I could imagine for this retelling of ‘Sweeney Todd’. He has the voice needed to sing this demanding musical theatre score and he has the danger and passion that Sweeney needs. We also have a wonderful shorthand at communicating with each other, having worked together for close to 20 years. I can’t wait for audiences to see what he will create.”

‘Sweeney Todd’ is Atlantis Theatrical Entertainment’s culminating production for its 20th Anniversary Season for 2019. Next year also marks the 40th anniversary of the musical, having first opened on Broadway in 1979.

Stephen Sondheim and Hugh Wheeler’s ‘Sweeney Todd’ won eight Tony Awards including Best Musical in its Broadway premiere, as well as the Oliver Award for Best New Musical. The Broadway revival went on to win two more Tony Awards taking its total up to 10 Tony Awards. ‘Sweeney Todd’ will run in October 2019 at The Theatre at Solaire.

Next Lea Salonga is Mrs. Lovett in 'Sweeney Todd'