What can you do for love? 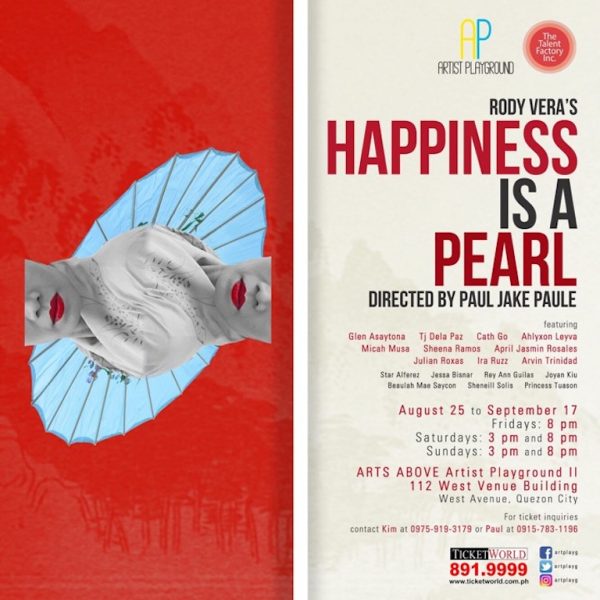 Witness the critically-acclaimed “Happiness is a Pearl” as Artist Playground brings it back to life, by popular demand, in a second run! The show is set to return starting August 25, 2017, running until September 17, 2017. The new production will be staged at a larger venue at the Arts Above, Artist Playground II, 112 West Venue Bldg., West Avenue, Quezon City.

The play revolves around three characters—Kenji, a male Japanese gigolo; Maria, a poor Filipina Japayuki; and Mari, a desperate housewife who falls in love with Kenji.

Before becoming a prostitute in a club in Kabukicho, Tokyo, Mari was married to a wealthy businessman. But Mari’s billionaire husband soon leaves her when she becomes attached to a male gigolo named Kenji, who has a pearl stitched under the skin of his penis. However, Kenji sets his eyes on a poverty-stricken Filipina entertainer named Maria. Intertwined by fate and struggles, how will Kenji, Maria, and Mari find the true meaning of love and happiness?

“Happiness is a Pearl” had its premier performances last July to August 2016 at 1701 The Little Room Upstairs, along Timog Avenue, Quezon City. As part of the opening of the Maybank Performing Arts Center in Bonifacio Global City, the original production was also restaged last November 2016.

Previous Review: Ballet Philippines’ “A Gala Celebration” is a lesson in dance appreciation