The Virgin Labfest, the annual theater festival dedicated to the staging of untried, untested, and untested works, is back for its 14th year at the CCP. This year’s 3-week festival offers twelve new one-act plays (from 150 submissions), four staged readings, and three revisited plays from last year’s festival. The theme for this year is ‘Silip’– each play expressing the complexity of human experience and aiming to create dialogue on social issues.

At the press conference held at Hotel Jen last May 30, Vice-president of the Cultural Center of the Philippines Chris Millado said, “14 years ago, we couldn’t even imagine that it would grow this big, but it did. This festival could apparently galvanize and attract different artists and directors from the different theater companies all over Manila.”

He adds how the festival addresses a clamor for new works. “Apparently there is now a hunger for original, brave, daring stories and as much as the playwrights and artists are willing to take risks, we have audiences who are willing to take these artistic risks as well.”

The Virgin Labfest will run from June 27 to July 15 at various venues of the CCP.

You can learn more about the chosen plays below: 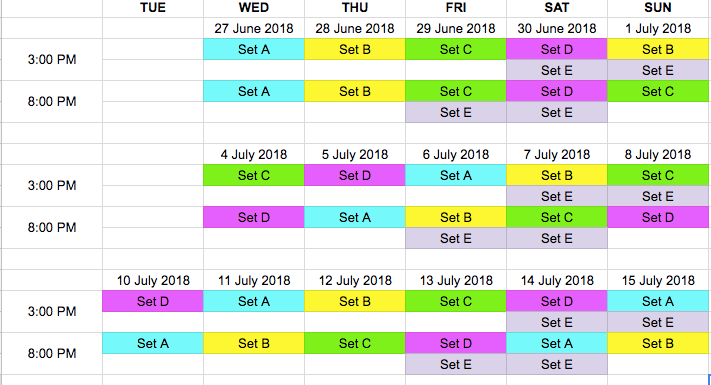 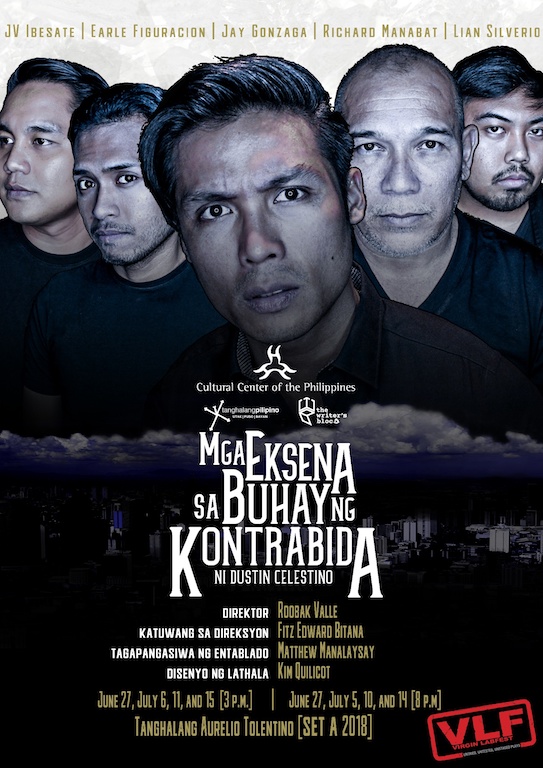 Jake is a villain. He’s violent, selfish, and reckless. Unfortunately, Jake doesn’t exist in a vacuum, and his behavior has consequences. Because Jake is a villain, people around him feel threatened, and these people look for ways to solve the problem that is Jake. Part origin story, part family drama, the play is a collection of conversations heard in the vicinity of a villain. 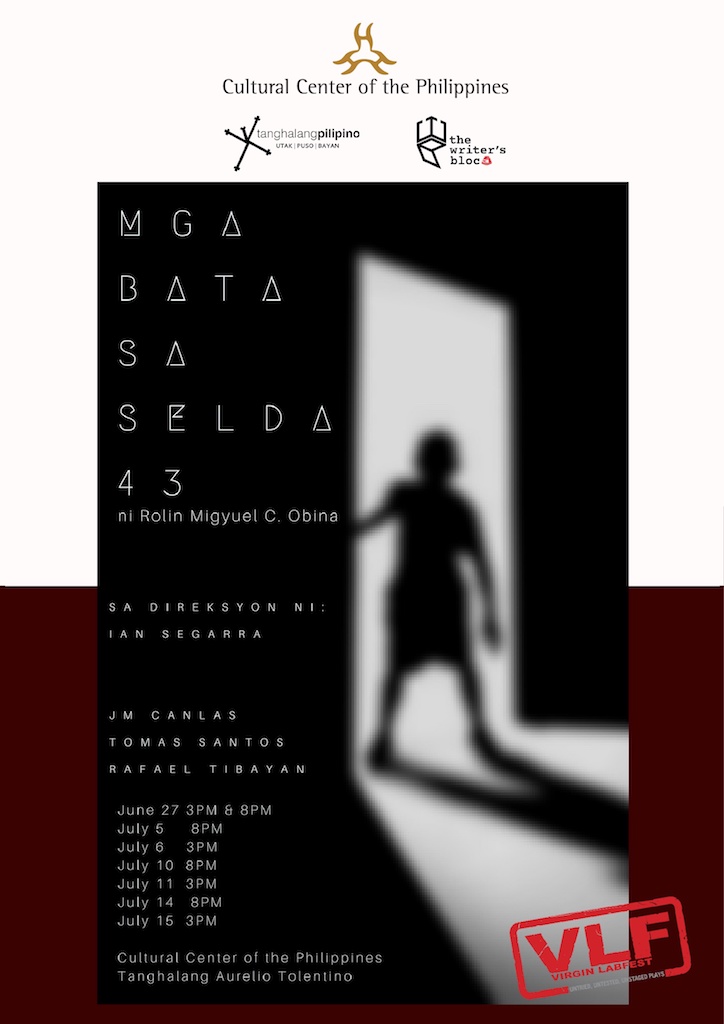 Philip and his younger brother, Ino, are ordinary and playful children from the slums who were kidnapped by aliens. Or so they thought. But their dreams of escaping the alien prison cell to be reunited with their mother and ailing grandmother are shattered when they meet Ed. 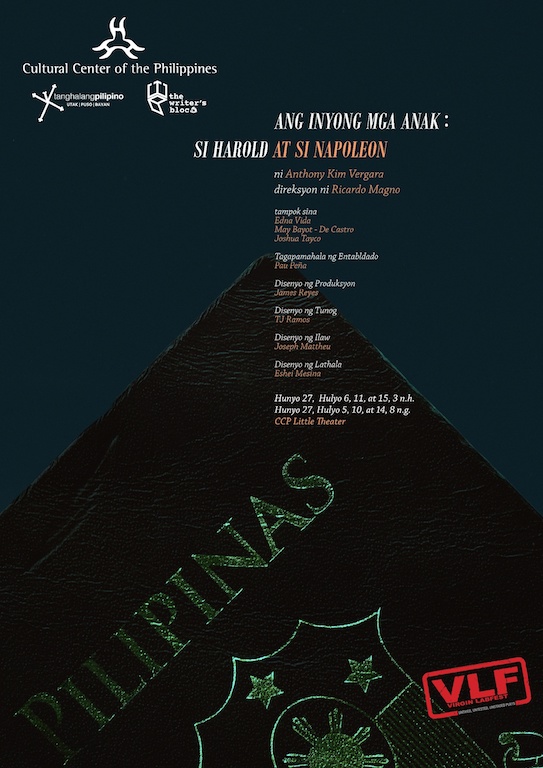 Harold was just about to leave the house after feeding her grandmother for another poetry gig and an out of the country trip when he opened up a conversation with his mother about Napoleon – a former college schoolmate who was recently brutally murdered in their province. The conversation then opens up a venue for powerful insights and revelations about the mother and son’s beliefs and political stand. The play will start and end with poetry, which will further tackle the mother and son’s will to exist as an ordinary citizen or a steward of change. 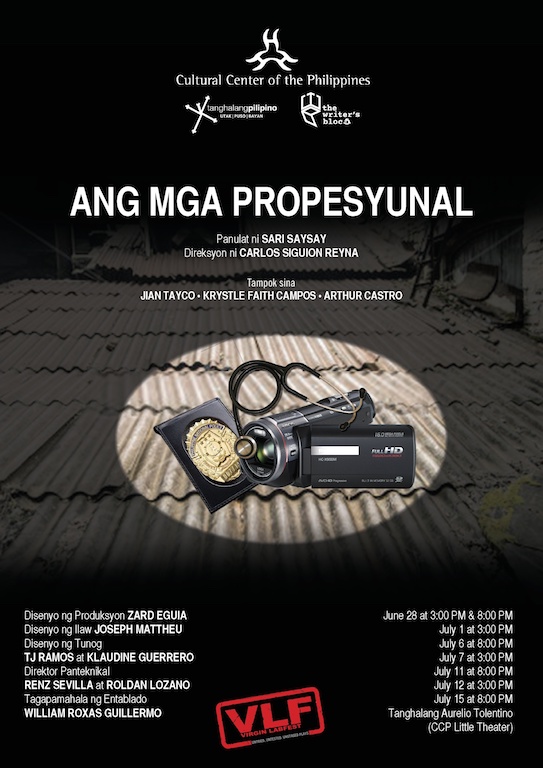 Pia is a ten-year old professional journalist who is barred from covering Malacañang. From here, she confronts reality and, along with her two friends, a doctor and a police officer, chooses to dwell in a make-believe realm of truth in order to investigate the predicaments of each other’s chosen profession while trying to discover facts about deaths – of innocent children, of freedom of expression, of democracy. 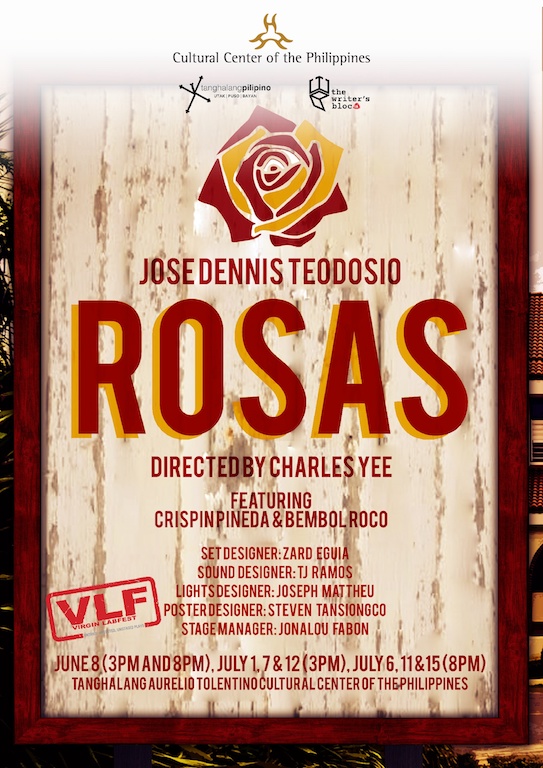 In the Home for Aged, two old men await for the sun to set. As they reminisce, the past and the present unapologetically confront them, forcing them to reveal and admit their fears and longings, and eventually, leading them to face and accept their inevitable future. Before them, a bed of blooming roses bears as a silent witness.  (“Rosas” is the last part of “Tatlong Bulaklak”, a trilogy of one-act plays.  It is dedicated in memory of theater stalwart, Soxie Topacio.) 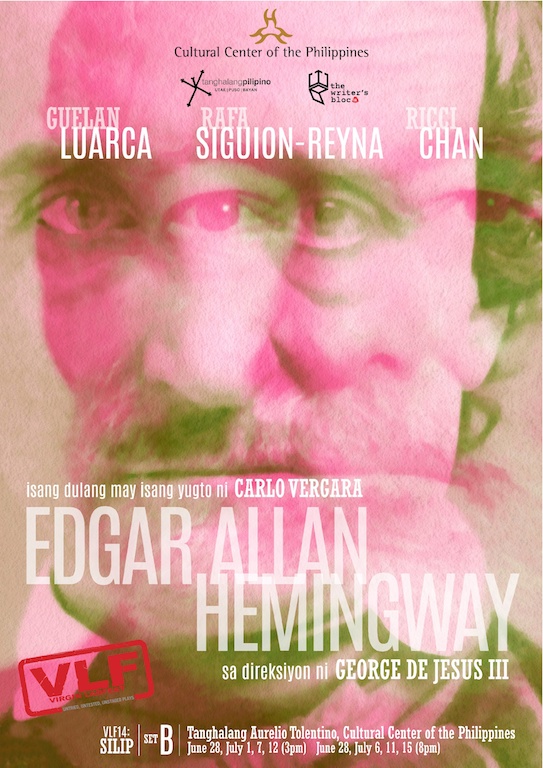 When a young man achieves a feat that many writers could only dream of, he’s thrust into a hectic life of celebrity, one unabashedly embraced by his supportive lover. But when a childhood friend shows up hoping to have a slice of the same success, an unexpected revelation brings about questions on ethics, survival, and freedom. 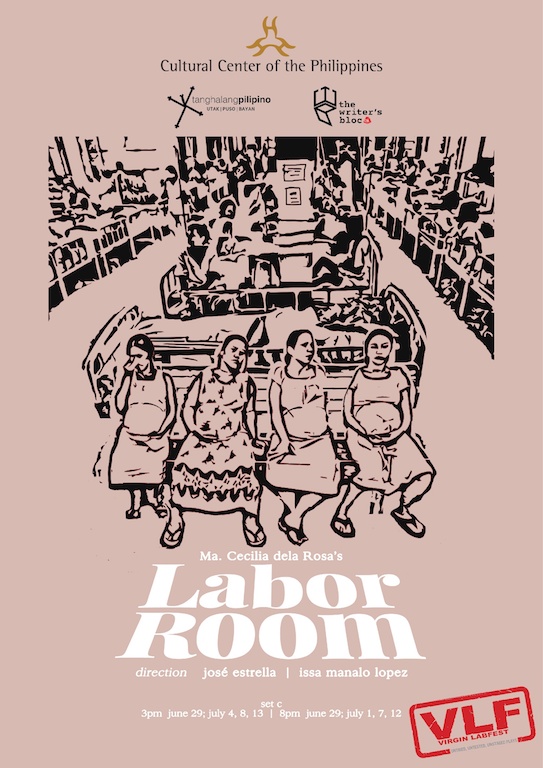 Three women meet in the busy labor room. As they watch delivering mothers come and go, they build a short friendship, that of strong confidence and genuine concern. Three women—one, having a baby, two facing the loss of one. All are giving birth to hope. 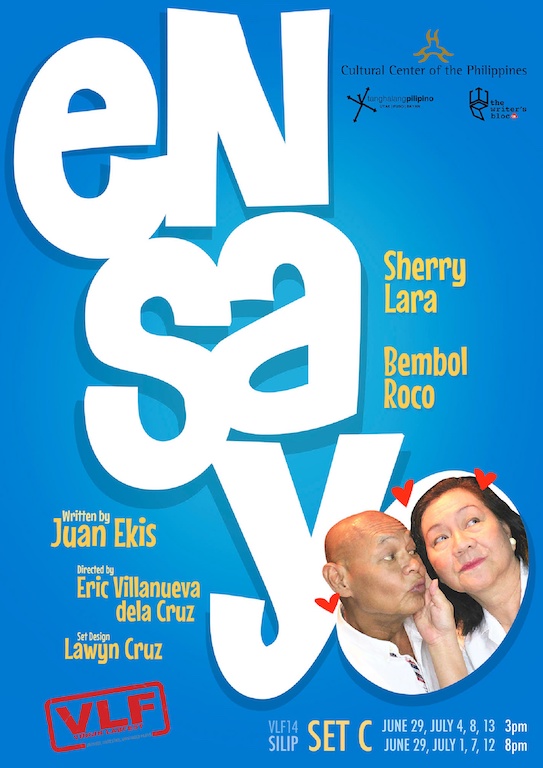 Lolo Peds (60’s) anxiously waits for his acting partner Lola Tisha (60’s) so that they can rehearse the scene they are about to present in acting class. Tisha arrives late, protesting the script which contains a kissing scene. Tisha suspects Peds asked to rehearse so he can get his way with her. Peds accuses Tisha of being unprofessional. As they work on the scene, they both discover that they’re in for a little more than just a rehearsal. 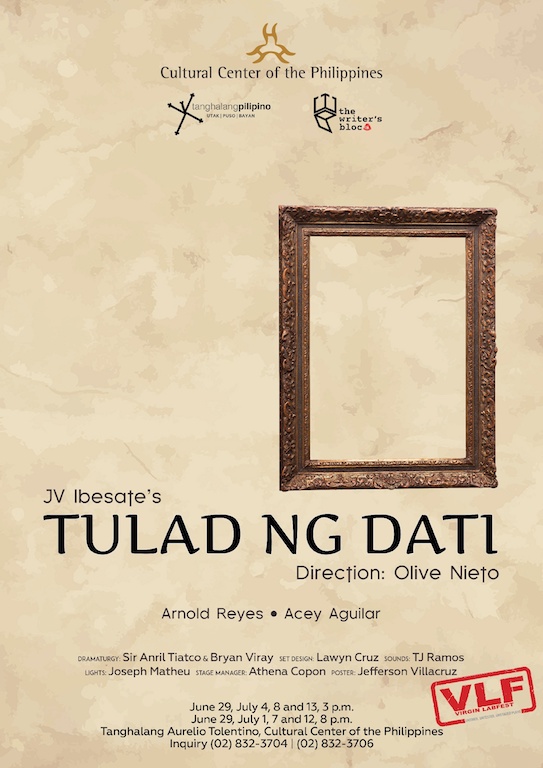 Returning home from being imprisoned for twenty years, Neil, a former teacher convicted for raping his adolescent student, reunites with his younger brother Norman. Home is where many of the brothers’ secrets have been formed, that Norman wishes to forget. What supposedly is a happy reunion turns sour when past issues re-emerges, forcing the two to come face to face with their darkest, most disturbing secrets. 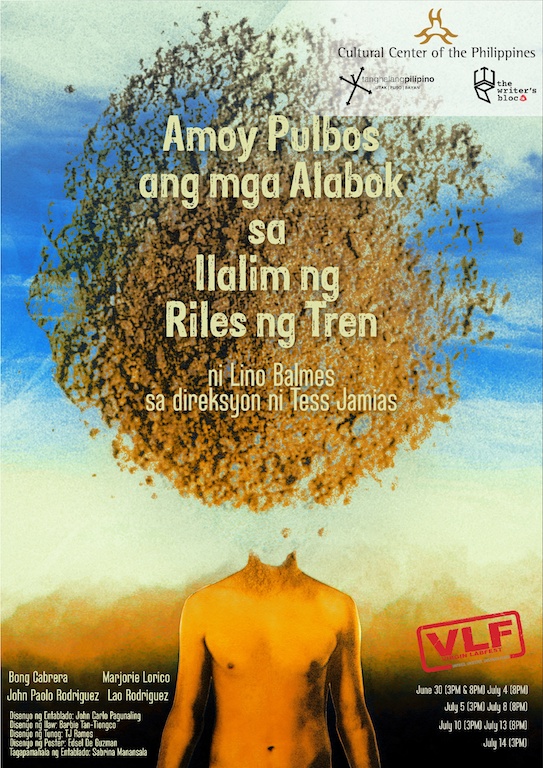 Live-in partners Chona and Ramil argue about their misfortune inside their house beneath a railroad. A train passes by and we’re transported to a TV studio in Quezon City where Ramil performs a lousy pansit monologue during the elimination round of Pera o Bayong. Then, a different train arrives. 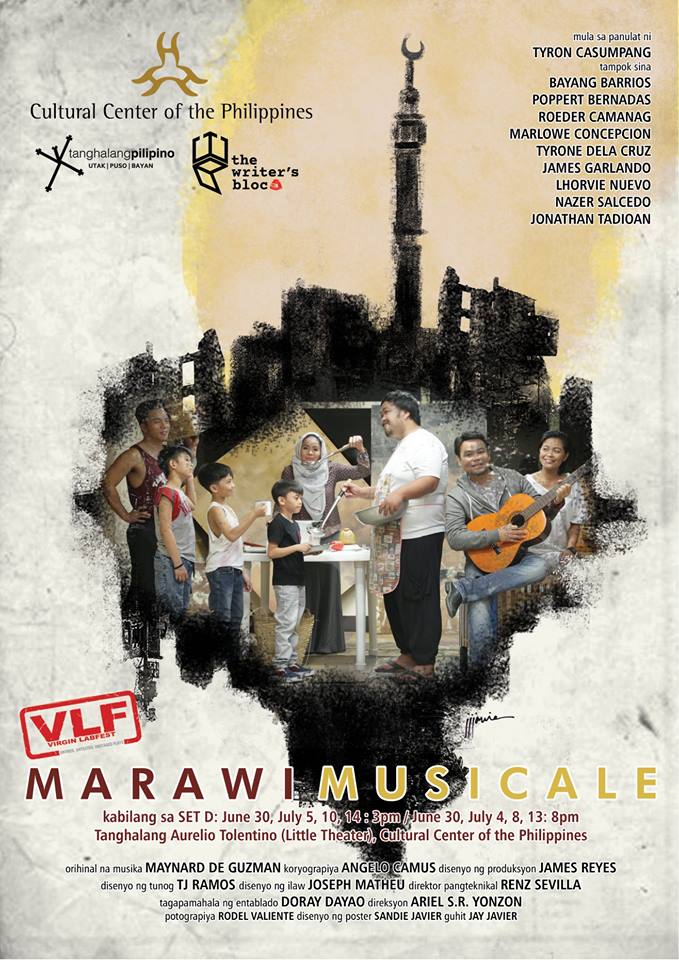 September 24, 2017. Four months since Marawi City was attacked and invaded by the terrorist group Maute-ISIS. While soldiers in Marawi fight the war against terrorists, a group of Christian and Muslim volunteers fight a war against hunger in an evacuation center located in a municipality right beside Marawi. As they already struggle to make ends meet in order to feed all the children evacuees in the area, they face a greater adversary: the immobilizing noise of gunshots, bombing, and air raids from the war zone. And in their war against the immobilizing noise, their only weapon is music. 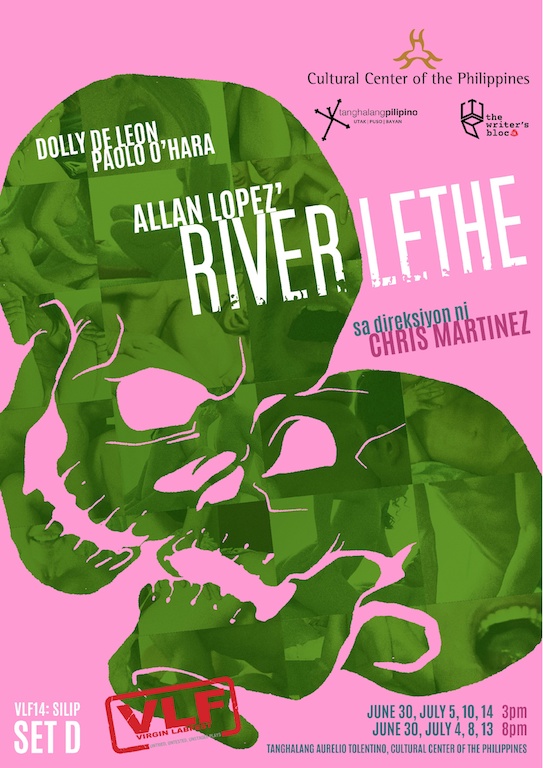 A room in a small lover’s hotel is sanitized, preparing it for its next occupant. Abe and Mara, two cancer patients who just finished with their early morning chemotherapy sessions, check in before returning to their regular lives. In snapshots, we see the few hours they are together exploring fetishes, kinks, uncanny sex and hopeless medical conditions – the nakedness of their bodies shadowing intimacies that nobody outside the room will ever know. All is left in the cramped space to be forgotten – a dip in the mythical River Lethe, where one drinks to forget. 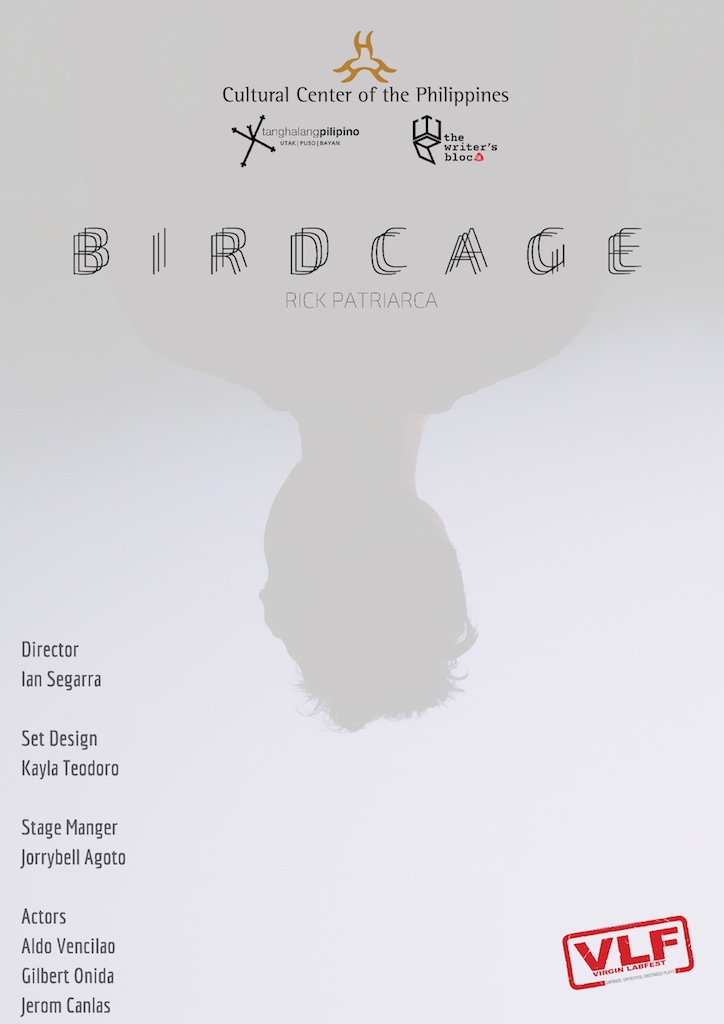 As two of the longest-staying employees in the BPO company, Ed and Arthur have witnessed the departure of many colleagues from work. When a young teammate suddenly resigns to pursue his dreams, the two contemplate about their future in the industry, and on everything they have sacrificed to secure their comfortable lives. 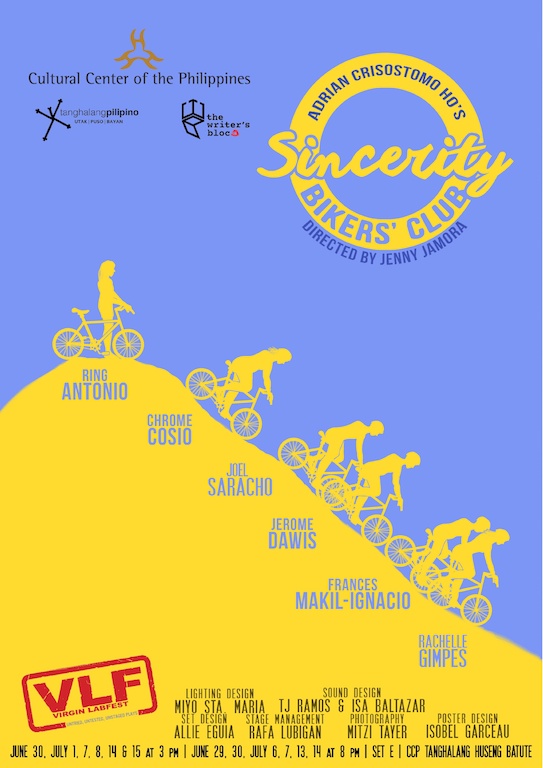 The only bikers’ club of Barangay Sincerity welcomes a new member: Louella, a widow from Manila. All five original members are happy about the new addition to their club, except for one who reveals that Louella is rumored to be a drug user and that her husband was killed by the police for being a drug addict. The revelation causes dissent amongst the members. Those who fear for the club’s reputation and their safety want Louella out. Some, however, feel that Louella shouldn’t be punished for the tragic events of her past. All are faced with a dilemma: will they succumb to fear or will compassion win out?

3. PILIPINAS KONG MAHAL WITH ALL THE OVERCOAT 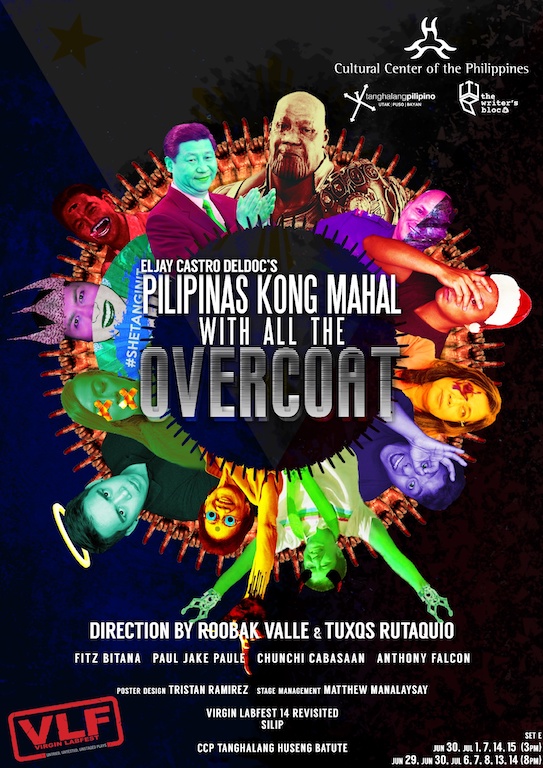 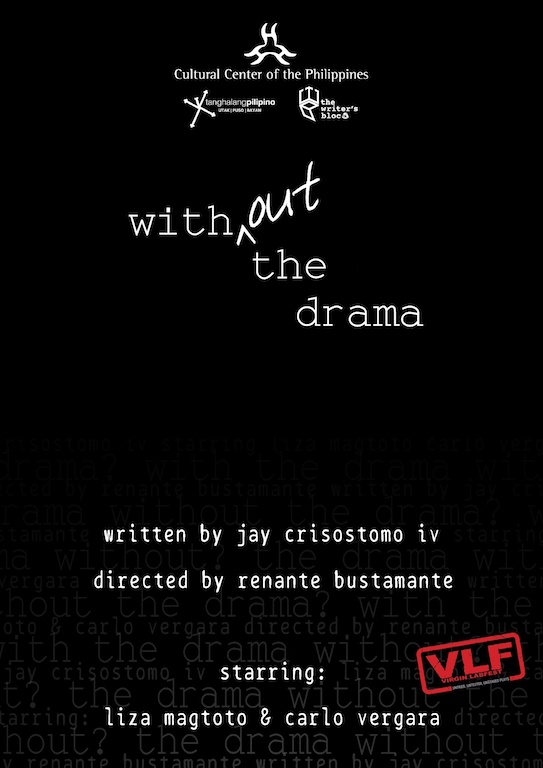 Writers Alister and Loraine meet up one last time before they part ways indefinitely. They sit down in the apartment they shared as husband and wife to write a play about their romance: how they met, how they fell in love, and how that love fell apart. As they write, they reminisce, they relive their past, and understand. After writing the play, Loraine hands Alister their annulment documents. Alister leaves. Alone, Loraine types a single word: Epilogue. 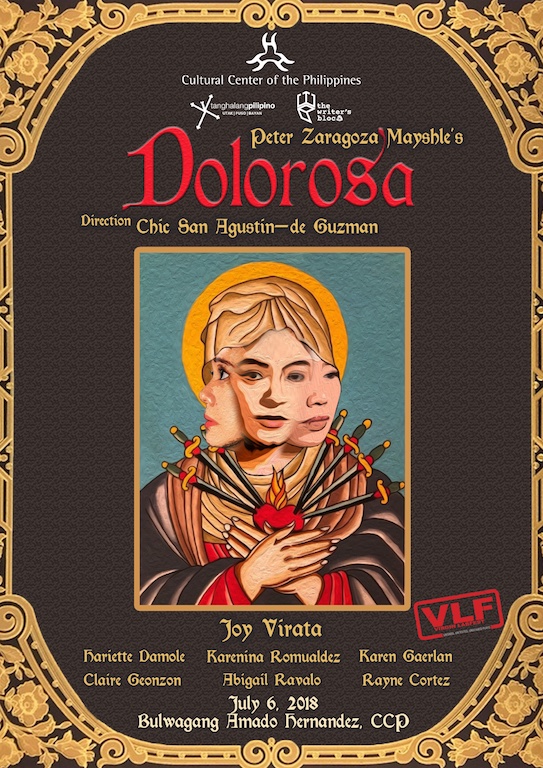 In “Dolorosa,” each year for the Holy Week procession in Paete, Laguna, a family’s prized heirloom, a one-of-a-kind wooden statue of the Mater Dolorosa, is put together and made whole by three sisters: Ate Maria, Dete Alicia, and Juliana. On this Maundy Thursday, they await the visit of their mother Pilar, who mysteriously abandoned them fifteen years ago. When she arrives, the sisters will confront the ghosts of their past and one shattering truth about their beloved Dolorosa statue. 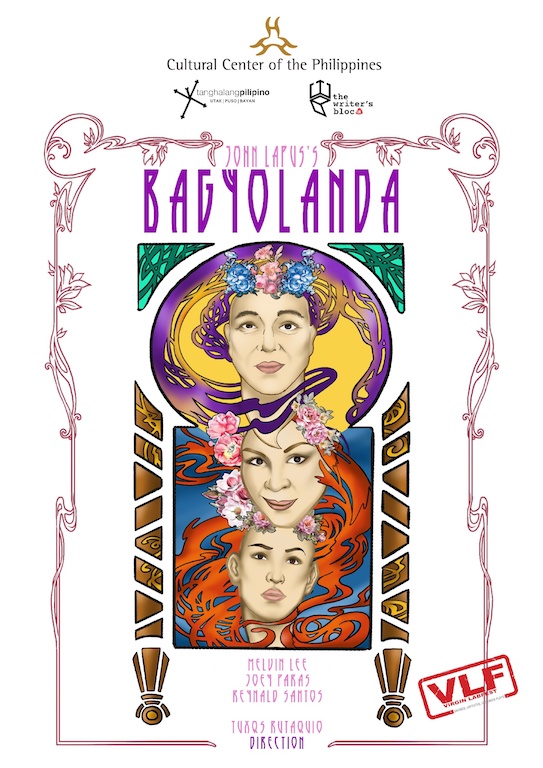 Bagyolanda is about the tragic but fun experience of three generations of gays, who found themselves trapped in a beauty parlor, on the day super typhoon Yolanda hits their province. Showing resiliency & strength amidst the tragic storm, the three entertained themselves by talking about their favorite topic, Beauty Pageants. 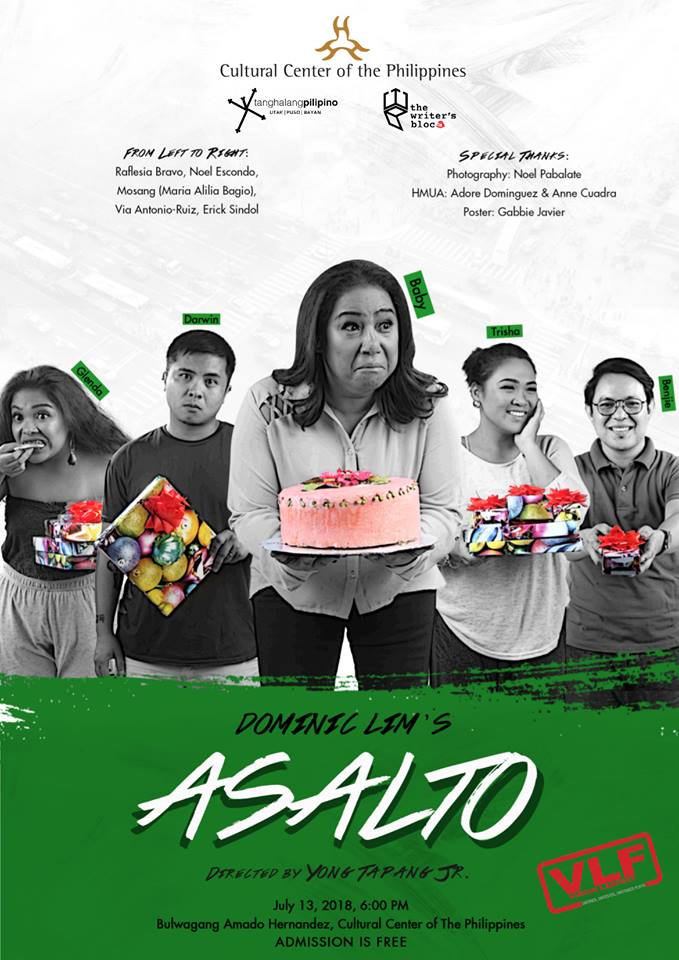 On the night of her fifth “fake stroke,” a hypochondriac mother tries to convince her two sons and daughter that tonight is the night that she will finally die.

*The information contained will be updated on a regular basis.

Next FIRST LOOK: Hit Songs from All Out Of Love the Musical Performed by MiG Ayesa and More! 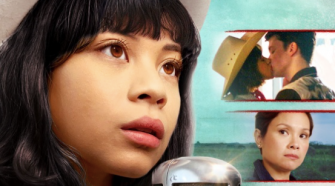 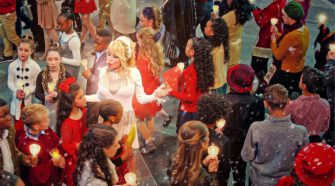