Written by Stephen Sondheim (music and lyrics) and George Furth (book), ‘Company’ revolves around a bachelor named Bobby, a single man unable to commit fully to a steady relationship or marriage. The musical explores his relationships through a series of short vignettes, breaking the traditional mould of a book musical. The musical first opened on Broadway in 1970, where it won 6 Tony Awards including Best Musical.

Open auditions will be held on February 4,10am-6pm at the Zobel de Ayala Recital Hall of the Maybank Performing Arts Theater. It is open for all male and female actors over 21 years old. Interested participants are required to bring a professional headshot and a résumé. They should also prepare one musical theater song that shows off their range, as well as a piano piece. 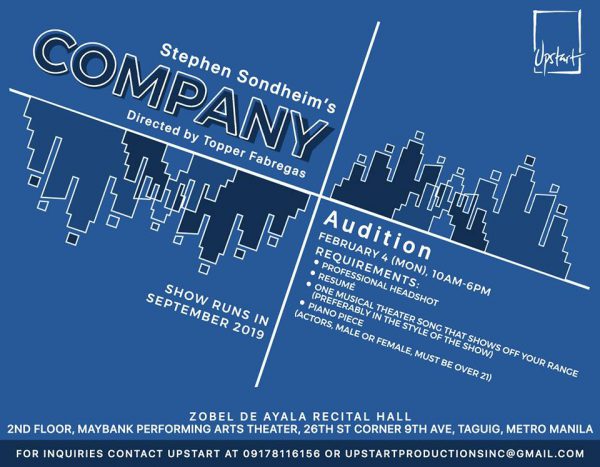 The show will be directed by Topper Fabregas. Further details about the show have yet to be announced.