Once a Panahon is a trilogy of 1 act plays written by actor-playwright, Juliene Mendoza, most recently seen as Julian Bartolome in Dekada ’70. These 30-minute plays are products of writing workshops conducted by award-winning playwright George de Jesus from 2012 to 2017.

This is the first project of Mendoza as producer, who teams up with his partners at the 9th Studios Creative Hub. The 9th Studios, one of the newest venues for creative projects, provides a space for dance, fitness, art and music events as well as workshops, seminars, lectures, and most recently, theater performance. 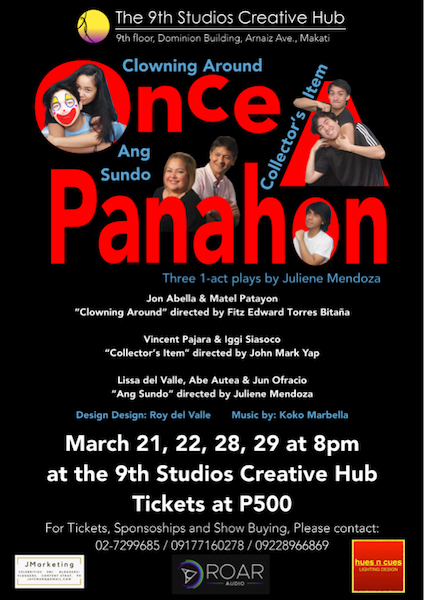 The three featured plays are all based on fiction; slightly odd and surreal. Clowning Around is a quirky love story about a Clown and an emotionally unstable girl. It will be directed by Fitz Bitana, featuring cast members Jon Abella (Dekada ’70, Eto na! Musikal nAPO!) and Matel Patayon (Himala: Isang Musikal, Rak of Aegis).

Collector’s Item, first staged in The Virgin Labfest, is about two best friends, one a bully and one a nerd, fighting over a college crush. It is directed by John Mark Yap, featuring cast members Vincent Pajara (Dekada’70, Laro) and Iggi Siasoco (Dekada ’70, Mula sa Buwan).

The third play, entitled Ang Sundo, is loosely adapted from The Selfish Giant by Oscar Wilde, and tells the story of the Gardener of an Enchanted Garden, and his dilemma of choosing life or death in the twilight of his years. It is directed by Mendoza himself, featuring cast members Anna Lissa Del Valle (Florante at Laura, Ibong Adarna), Jun Ofrasio (Miss Saigon, Noli Me Tangere), and Abe Autea (Dekada ’70, UPPT’s Nana Rosa).

Next 10 University and Community-Based Theater Productions this March 2020