“Harry Potter and the Cursed Child” starts previews on June 7, and to celebrate, Pottermore has just released new portraits of the cast in costume. This is the also the first time we’re seeing Jamie Parker (who plays Harry Potter) with the trademark scar. We’re not crying, you’re crying.

(READ: 7 Things We Know About Harry Potter and the Cursed Child)

Fans everywhere are definitely feeling the excitement, with J.K. Rowling saying that Parker in particular “simply is Harry now.” We’re also getting teasers about the next generation: we can expect to see that Rose Granger-Weasley is surely her mother’s daughter, and it seems Scorpius Malfoy is a bit of a ladies’ man.

A behind-the-scenes video of the photo shoot can also be viewed below.

Although it’s been reported that the first batch of tickets has sold out, forty late-release tickets, called the “Friday Forty”, will be sold weekly on the play’s website for the following week’s performances. Selling started yesterday for the preview season and will continue for the play’s official run. 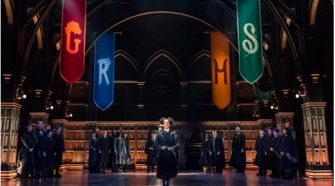 First Look at Harry Potter and the Cursed Child!