The famous Ilocano epic, “Lam-ang”, is set to be staged as a musical by Tanghalang Pilipino starting this November.

The story about the life and journey of the epic hero of the north is considered to be the first recorded Philippine epic in written form. This stage adaptation is written by Jen Darlene Torres (libretto and music), with dramaturgy by prolific playwright Eljay Castro Deldoc.

The show will be directed by Fitz Bitana and Marco Viaña, with set-design also by Viaña. “Lam-ang” will run from November 29 to December 15 at the CCP Aurelio Tolentino (CCP Little Theater).

The company has just announced that it will be holding open auditions for ensemble players (actors, movers, and singers) on June 2, 9am onwards. Skills in capoeira, martial arts, gymnastics, cheerleading, breakdancing, and instrument playing, as well as knowledge of the Ilocano regional language, are a plus. It will be held at the Bulwagang Francisca Reyes-Aquino of the CCP.

1. Pre-register and send their updated resumes with picture to TP.lam.ang@gmail.com on or before May 20.
2. Prepare a 2-minute monologue in Filipino, a movement piece, and a Pinoy folk rock song (i.e. Asin, Pinikpikan, and Talahib People’s Band).
3. Wear rehearsal clothes and be ready to perform a scene and/or song from the play and to learn a movement/ dance routine. 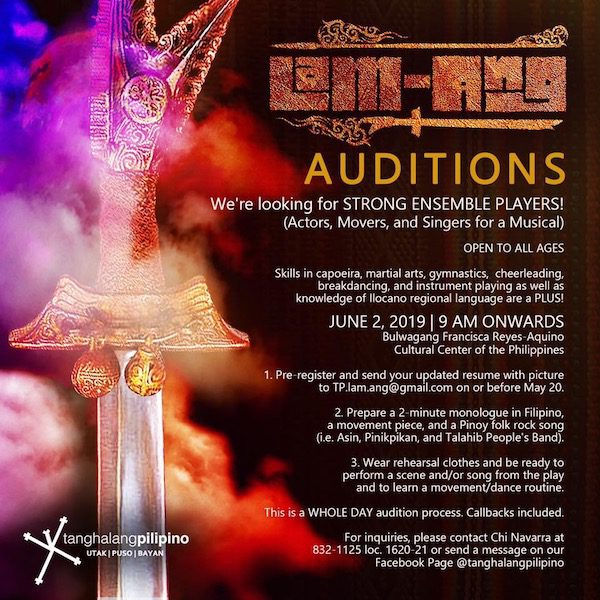 The auditions will be a whole day process. For inquiries, contact Chi Navarra at 832-1125 loc. 1620-21 or send a message to the company’s Facebook page at @tanghalangpilipino.

Next "Rak of Aegis" Reveals Returning Cast for 7th Run!