Theater legend Baby Barredo collaborates with Joel Trinidad (book and lyrics) and Ejay Yatco (composer) to direct an original musical based on the story of Our Lady of Guadalupe.

The show is set in 1531, where a series of unexplained events in a newly conquered land then known as New Spain change the world forever. Barredo says it is not a conventional faith-based show. “It’s not a ‘religious’ musical as such. It’s a powerful piece of theater that just happens to contain religious elements.” It’s an important distinction, and one that drove the creation of the show from the start. 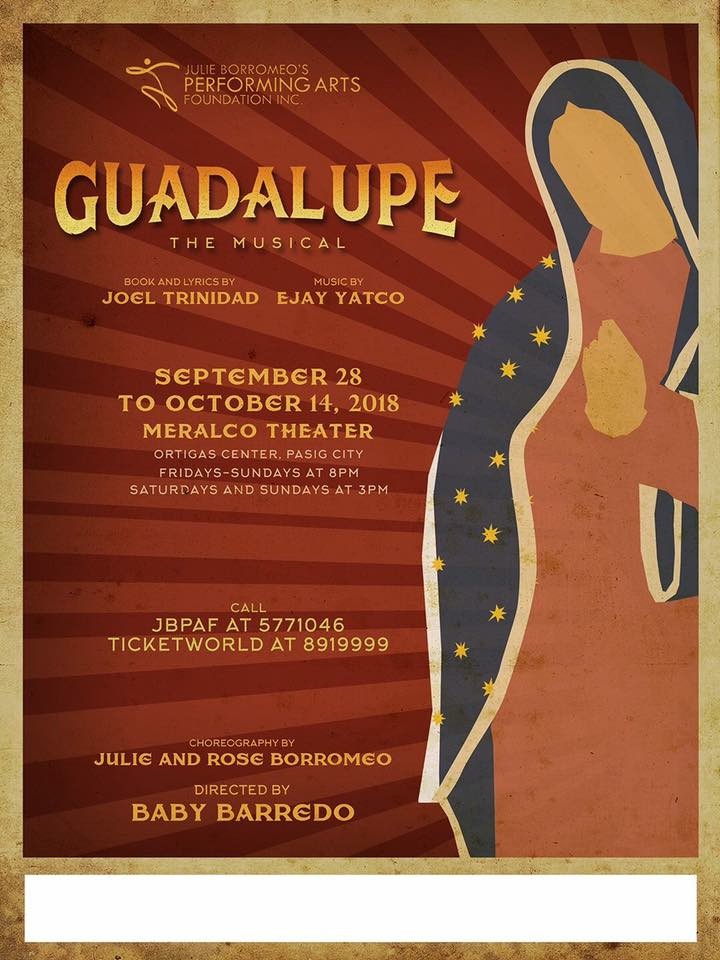 Trinidad adds that they designed it as a piece of entertainment. “You don’t have to be a devotee of Our Lady of Guadalupe to enjoy the show”, he says. “We want people who like the theater, who enjoy beautiful songs, who like drama and nice choreography to enjoy the show.”

He adds that it’s not meant to be evangelical. “It’s a show that just happens to have as a topic some amazing miracles that happened in 1531. If you like the theater, we believe that you will enjoy this show.”

What can we expect from the music? Yatco says that the music is a mix between the 1600’s Aztec and the Spanish music. “The setting of the play happened in the music revolution in the 1600s when both cultures started to emerge. So on one hand we have the drums and the flutes of the Aztecs and we have the guitars and the Mariachi sounds. It’s also very Broadway, so it’s kind of a hybrid.”

Trinidad also clarifies that the musical is not meant to be a history lesson. “There is a historical basis for the story. However, just like when you adapt any historical piece, you have to add some creative elements.” He likens it to musicals like Evita. “These people existed. Evita Peron existed. But Che Guevara never met Evita. So you have the reality as your basis and then you build on that.”

The show will run from September 28-October 14 at the Meralco Theater. Tickets will be available on Ticketworld soon!

Next FIRST LOOK: “Gee-gee at Waterina”, an Original Musical by Artist Playground