Theatre Titas and Duende Theatre, in partnership with Z Hostel and PLUD, join forces this 2018 in celebration of the golden anniversary of Dr. Paul Dumol’s ‘Ang Paglilitis kay Mang Serapio’. Penned in 1968, Paul Dumol’s work is considered to be the Philippine’s first post-modernist play.

‘Ang Paglilitis kay Mang Serapio’ sets the audience in a courtroom of beggars to watch a trial unfold. Today’s defendant is an elderly beggar named Mang Serapio, who is accused of harboring a child. This affects the communal income of the association of beggars, the federaçion. As the trial pushes through, we see the flaws in the federaçion’s judicial system, which may feel all too familiar.

Since its inception 50 years ago, Paul Dumol’s gripping and dark story remains timeless and relevant, and has been studied and staged by schools and theatre organizations alike.

In honor of its golden anniversary, Theatre Titas and Duende Theatre have joined forces to stage Paul Dumol’s undying script this September in The Ruins at Poblacion. Intent on taking Dumol’s vital message outside the confines of a traditional theater, this production of ‘Ang Paglilitis kay Mang Serapio’ places the audience in the trial with the other beggars in an immersive theatrical experience. 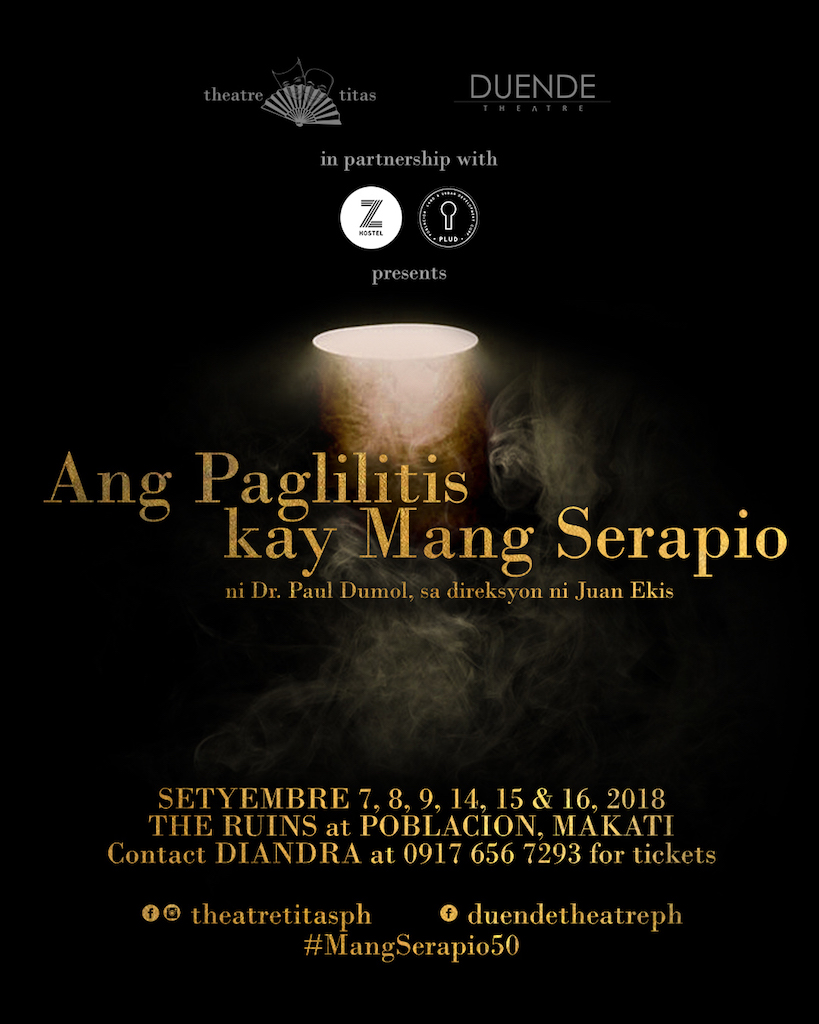 THEATRE TITAS is a group of individuals whose common denominator is a passion for theater.

Fresh from its successful maiden production, a twin-bill feature called WHAT’S IN THE DARK? (October 2017), which starred Epy Quizon and Javier Coromina, THEATRE TITAS is a group that aims to stage a diverse selection of works: classical, new, and experimental. They not only stage, but critique, discuss, interpolate, and share their theatre experiences; usually over a glass of wine, a plate of sushi, two slices of cake each, and a lot of laughter.

DUENDE THEATRE believes in art in alternative spaces. They believe that art should not be limited to traditional venues but should be open for production in various places. They have been successful in achieving this, having staged their plays in coffee shops, restaurants, and even in hotel rooms.

Next WATCH: Ang Huling El Bimbo Cast Sings 'With a Smile' at Rehearsals