Get to know more about him in this quick minute video feature, quarantine edition. It has been condensed and edited.

Last show that made you cry?

Dear Evan Hansen. That scene with Evan and his mom, I think So Big, So Small is the title.

First theater production you ever saw?

Repertory Philippines’ Gaybirds. That was one of the funniest plays I’ve ever seen.

Jesus Christ Superstar because I think it was the very first musical that I ever really watched and absorbed. In the Heights and Hamilton.

Judas in Jesus Christ Superstar, Jamie in The Last Five Years, Aaron Burr in Hamilton, Usnavi in In the Heights, Quasimodo, and Evan Hansen in Dear Evan Hansen.

If you weren’t in theater, where would you be?

Chorus members in big musicals. They give so much heart and soul. No one believes that they have small roles.

The Horse and His Boy. Every single time I would have to ride the horse, that’s difficult, physically.

I was a sophomore in college. It was recruitment week for all the organizations. So my friend and I, we stopped in front of this booth called Ateneo blueRepertory. I had no idea what that was, but my friend knew. So my friend just goes, “I dare you to sign up.” And I’m like, “Okay.”

I wish there was more interest when it comes to watching theater productions. We have so many hardworking artists and they are all, I swear, they are all amazing. It would be nice if a lot of people could come and watch. So hopefully, after this quarantine is over, people come to the theater.

You can find more of Reb on his YouTube channel with Tanya Manalang entitled Reb x Tanya.

You can watch the video feature below. 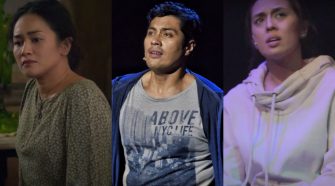 8 Songs about Betrayal from Musicals