‘Mygahd I Hate Drags!’, a twinbill production of Rogelio Braga’s Ang Mga Maharlika and U.Z Eliserio’s Karitas at Damaso opens the season to serve as an outright critique of the ills furthered by the pronouncements of the Duterte Administration.

U.Z Eliserio’s Karitas at Damaso is a portrayal of feudalism inherent and evident in the dynamics of the Catholic Church and how religion itself patronizes oppression, seeking to maintain asymmetrical power relations between its leaders and believers. Rogelio Braga’s Ang Mga Maharlika on the other hand, explores the bureaucratic-capitalist system in the country where the Marcoses are key players. Years after the death of dictator Ferdinand Marcos, his remaining family members are ever powerful as they assume high positions in the national government.

Karitas at Damaso tells the story of Juana Donna, a woman who wants to confess to a priest named Damaso, claiming that she lost her virginity due to rape. With the help of Damaso and of two nuns, Salve Regina and Karitas, they perform rituals for Juana Donna for her to get her virginity back: a gift that she can only give to her lover. After a series of arguments, Juana Donna finally admits that the real reason she went to the Church is for her to destroy all statues and the cross, for the person she truly loves, the same person she claimed to have raped her, is in love with Christ.

Ang Mga Maharlika tells the story of the scandalous love affair of Ferdinand E. Marcos and Hollywood actress Dovie Beams as it is recounted by fictional versions of the present-day matrons Imelda Marcos and Dovie Beams. In a fictional meeting between the two broads, Imelda begins to unravel what really happened between her husband and the Hollywood starlet on the set of Ferdie’s propaganda war Film ‘Maharlika.’ Many secrets are revealed as Imelda and Dovie get on each other’s throats and ending with a simple question: which of the two women really loved Ferdinand?

The production is to be staged on the College of Architecture Amphitheater at the University of the Philippines Diliman with the following show dates: 14, 21, 28 (Saturday), 16, 23, and
30 (Monday) October 2017. All shows will start at 7:00 PM. Ticket prices are to be announced. 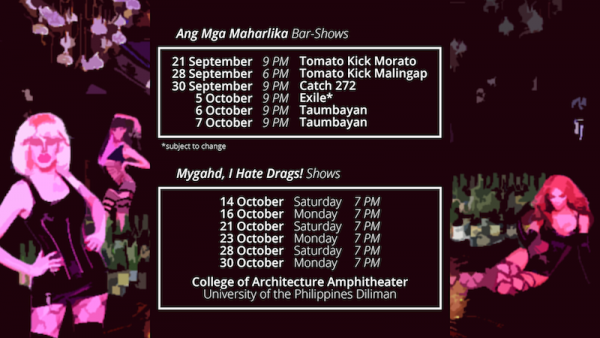 Before the main event, Ang Mga Maharlika will be staged at various bars within Quezon City. Shows will be along the following dates with their respective venues: 21 (Tomato Kick
Morato), 28 (Tomato Kick Malingap), and 30 (Catch 272) September 2017; 5 (Exile on Main St.), 6 and 7 (TAuMBAYAN) October 2017. Audiences will pay what they can.

The UP Repertory Company is a non-stock, non-profit student theatre organization based in the University of the Philippines Diliman. Founded in 1972, UP Rep remains steadfast in staging theatre productions and live performances that aim to raise the social consciousness of the Filipino audience, and has been named University Performing Group for Philippine Theatre.

Next Behind the Scenes: Meet the Kids from 'The Sound of Music'