Does she ever know she is our hero?

Idina Menzel, the Broadway Star who needs no further introduction, has once again been cast in a role that will bring her already soaring career to new heights.

Menzel will be starring in Lifetime Channel’s remake of Beaches, the 1988 feature film directed by Gary Marshall. The project has recently been given the green light by the studio.

She will be taking on the role of CC Bloom, originated and popularized by Bette Midler.

Beaches is a story of friendship that stemmed from childhood, and how this bond transcends time and distance. Menzel plays CC, the aspiring singer who is trying to make it in Los Angeles, until she is finally discovered and given her first break. Hillary (Barbara Hershey in the film), is CC’s bestfriend, daughter of a prominent lawyer, who is also struggling to find her own path. The role has yet to be cast.

The Lifetime remake will feature Menzel singing the iconic songs such as “Wind Beneath My Wings,” and “The Glory of Love.”

If this, in itself, is not a treat, then knowing that Queen Menzel will be recording additional songs for the film remake is an early Christmas gift!

Lifetime Channel’s Beaches is produced by Denise Di Novi and Allison Greenspan, and is set to premiere in 2017.

Meanwhile, who’s with me in wishing that the role of Hillary will go Kristin Chenoweth? Oh my fangirl heart will burst with joy!

Next “Wings”: Ballet Philippines' 47th Season Takes Flight with “Firebird and Other Ballets” this August 19-21 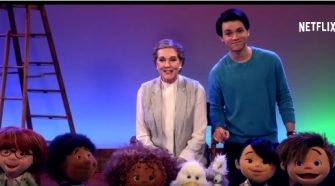 WATCH: Idina Menzel Talks about Out of Oz Performance with Kristin Chenoweth