After two years of online performances and the streaming of archived works, the Virgin Labfest (VLF), the festival of untried, untested and unstaged plays, returns to live stage with 12 new works slated on June 16 to 26, at Tanghalang Huseng Batute (CCP Studio Theater). Tickets for the live shows are on sale via Ticketworld.com.ph. There is also an option for online streaming via Ticket2Me.net from June 30 to July 10.

For its 17th edition, VLF follows the theme “Hinga” to “underline the need to breathe, to be present and feel alive.”

“After being isolated in our houses, we now focus on the importance of community — the need to share space and time and revel in one another’s presence — and the urgency of theatre and performance,” said VLF festival director Tess Jamias who is sharing the role with TP associate director Marco Viaña.

Aside from marking its return to THB, its original home, VLF 17: HINGA reintroduces the practice of grouping plays into sets under shared themes and other commonalities.

VLF 17 will also have a new component called Theater Talks, a curated forum series on theater and creative processes. To be livestreamed during the festival, these talks feature theater practitioners who will share their know-how on production works and take in questions from the audience to elicit a lively dialogue on contemporary theatre-making.

The festival brings back its mainstay components such as the VLF Fellowship Program, with mentor Glenn Sevilla Mas and director Dennis Marasigan, and the VLF Playwrights Fair under the direction of Rody Vera and coordination by Beverly Siy. 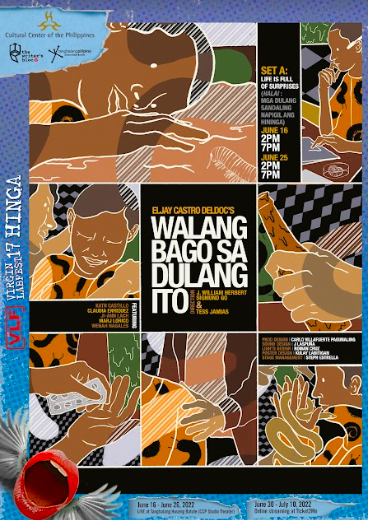 Hija couldn’t classify millipedes as worms or insects. Not knowing what they were, she relied on what she knew would give her answers — science. What Hija didn’t expect, however, was that this pursuit of understanding myriapods would lead her to bewildering encounters that asked her whether she should recoil in defense, or blind her predators like a millipede would. Finding herself preyed on by those in positions of power, Hija learns that the ecosystem she hoped she’d thrive in is a different realm of science that offers more questions than answers. 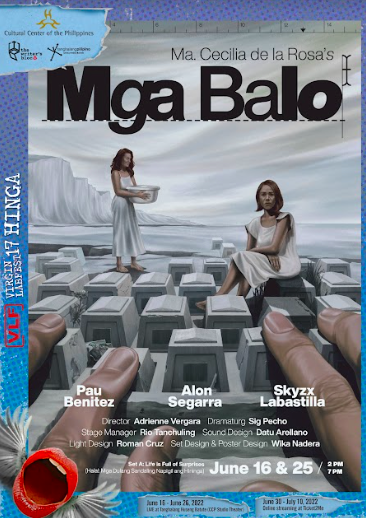 A writer tries to decide on the future of the play she is writing. She returns to her material and seeks the help of the widows who rightfully own the story. 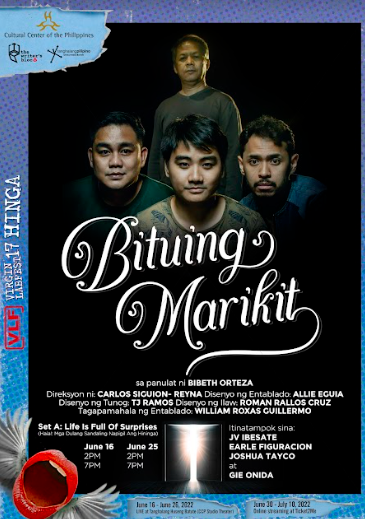 Carmela, Allan’s second wife, dies. He wheels her into the morgue singing her favorite song Bituing Marikit, then leaves to buy lipstick for her.  The stepsons arrive: Peping, the eldest, and Butching, the youngest, from Manila; Bok, the middle child, from Dubai, with a wedding gown he wants his Nanay Carmela to wear in the coffin to make up for the years she and Allan lived together without having married. In the morgue, Peping reveals something about their stepmother. Allan walks back in and we find out how much of a Bituing Marikit Nanay Carmela is, to her boys. 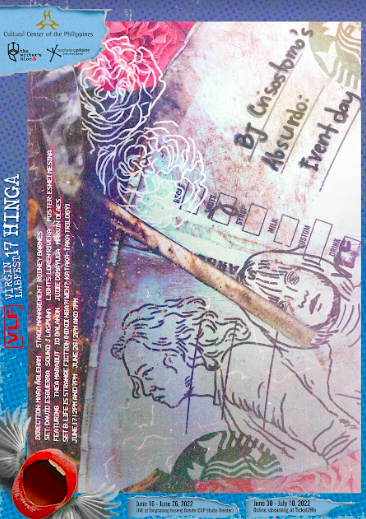 The world is about to end but Aly and Rain are still at their posts as project coordinators at a massive End of the World Party. An audience of millions is having a great time but these best friends turned coworkers are just about to collapse from exhaustion after dealing with absurd client demands. They consider how they got there and must come to grips if their jobs have any ultimate meaning before time runs out. Abusrdo: Event day is part of a trilogy of one act plays dealing with the craziness of the Philippine event industry. 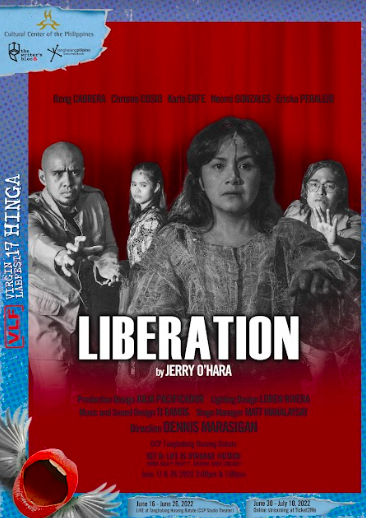 February, 1945, the American forces had almost liberated the entire Philippine archipelago from the hands of the Japanese Forces. The southern districts of the city of Manila is the last bastion that the Japanese stubbornly tried to hold on to. Confronted by sure defeat, the Japanese committed gruesome atrocities on the civilian population that did not discriminate on women and children. But the atrocities did not end with Japanese bayonets and rifles but was aggravated with the barrage of American bombs that likewise did not discriminate on who gets killed. Against this backdrop is the story of three Japanese soldiers left behind to engage the enemy at whatever cost in a desperate effort to put up pocket resistance.  In the face of sure death, one lost his humanity and went on a rampage; one desperately holds on to whatever is left of his humanity almost to the point of jeopardizing the mission; one acted to the true value of a soldier who is just following orders blindly.  Their values collided that ended up with them fighting each other. No one won including the Filipino child who survived death at the hands of these three Japanese soldiers. 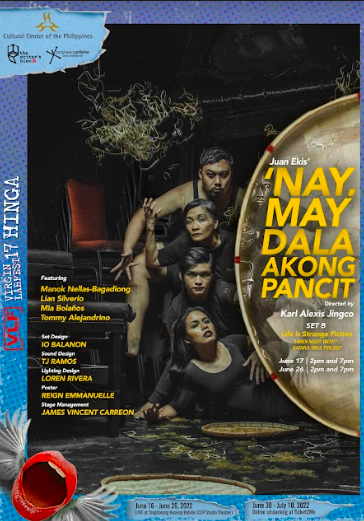 Mae discovers that she and her Kuya are stuck in a metaphysical loop of a Pinoy soap opera trope where every time her Kuya comes home with pancit, their mother dies. She struggles to convince her brother about the loop, suspecting that it is the pancit that causes the tragedy. But however much they try, for some reason, the pancit always finds its way to their home, resulting in tragedy. The siblings must now find a way to escape the loop and save their mother once and for all.

Stories of characters who are at a crossroad find their way to Set C: School of Life, which include Mikaela Regis’ Unica Hijas; Andrew Bonifacio Clete’s Punks Not Dead; and Anthony Kim Vergara’s Student’s Handbook. 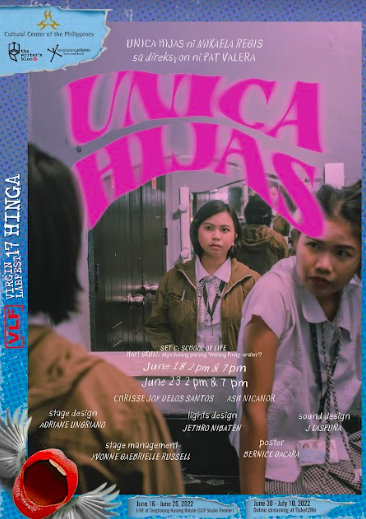 Caught by a nun in an almost-kiss, two girls with everything and nothing to lose are called into the principal’s office of an all-girls Catholic school. With less than an hour left until their future is decided, the two are forced to confront each other, their past, present, and their own selves. 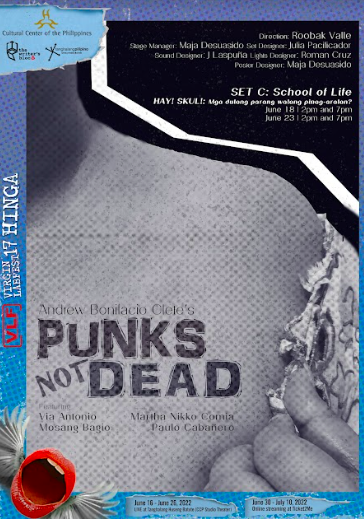 On the day of module distribution and retrieval, a mother complains to her son’s teacher regarding a discriminating item: “Ang tattoo ay simbolo ng pagiging kriminal.” As she shows her tattoo ‘Punks Not Dead,’ another parent who happens to be a policeman drops by. As the characters argue about the item, the play shows what’s permanently inked with prejudice. 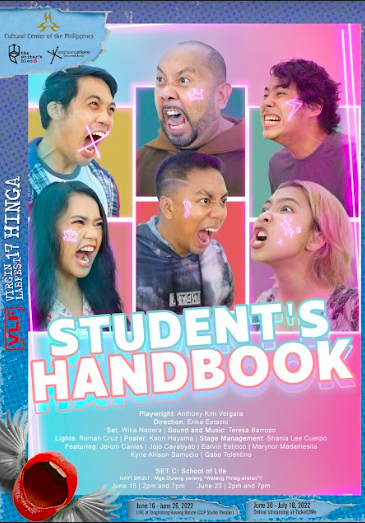 Colegio de San Pedro de Verona’s Student’s Handbook contains the institution’s strict academic policies and standards of conduct, but when a few pioneer students were caught violating some of its most outrageous regulations, the rules were put into question and things started getting ridiculously clairvoyant. 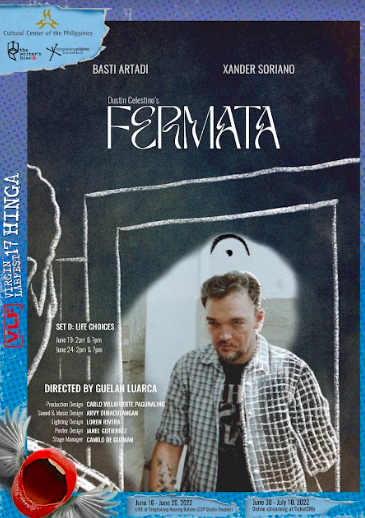 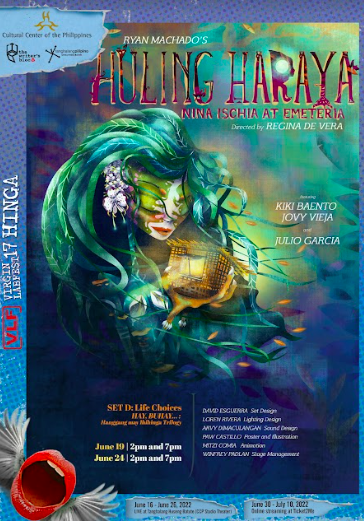 A bright full moon hovers above a quaint sari-sari store in Looc, Romblon. It is the night before Ischia departs to move-in with her father’s new family in Manila to begin college. Ischia’s mother, Emeteria, helps her prepare for the long journey ahead. Elaborate floral arrangements, haunting winds, and corny jokes aside, Ischia notices her mother preparing for something larger than her departure. As Ischia attempts to pull her mother close, she realizes that this might indeed be their last evening together. 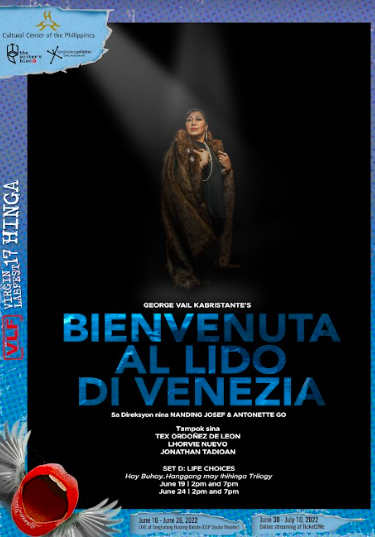 Viola, formerly Violeta, and Maximo worked as Filipino domestic helpers for a wealthy Contessa with Alzheimers in Lido de Venecia.  They are live-in partners, and are inheritors of a will that the Contessa will leave behind. A mysterious character named Charice or Sarah emerged in the couple’s household.  Tragedy strikes. Only one of the four characters survives in the end.

Previous ‘Bayan Bayanan’ Musical To Be Staged Live This July