The hit jukebox musical Mamma Mia, featuring the songs of Swedish pop group Abba, will be staged at the Theatre at Solaire in September 2018.

The show was last performed in Manila in 2012, and will return as part of the musical’s international tour featuring a cast from the UK.

Mamma Mia comes from the vision of producer Judy Craymer to use the catchy and popular songs of Abba to tell a story about love, friendship, and family. The musical centers around Sophie and her search for the identity of her real father, but also poignantly highlights the love between her and her mother.

With such hits as ‘Dancing Queen’, ‘Take A Chance On Me’, and the title song, Mamma Mia is one of only five musicals to run for more than ten years both on Broadway and in the West End.   Abba’s Benny Andersson and Björn Ulvaeus provide the music and lyrics, with a book written by Catherine Johnson, choreography by Anthony Van Laast, and direction by Phyllida Lloyd.

A movie adaptation of the musical was released in 2008, starring Meryl Streep. It held the title for the highest-grossing live action musical film of all time until last year, and a sequel starring Lily James is already scheduled for release this July.

Mamma Mia will run at the Theatre at Solaire for a limited engagement starting on September 29, 2018, with tickets going on sale today. 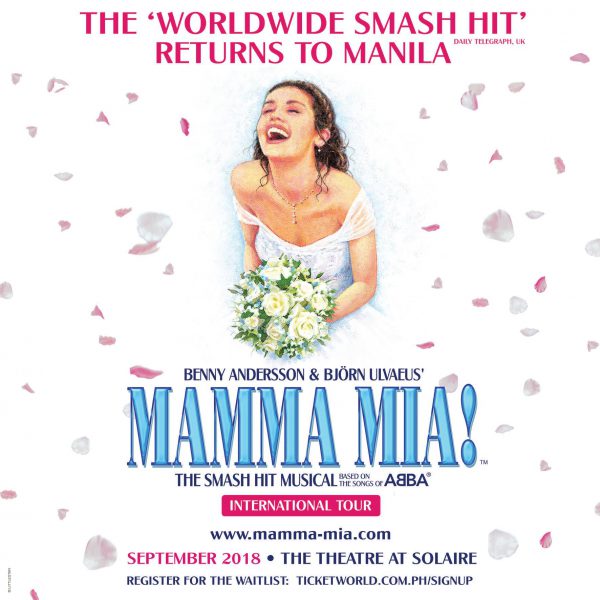 The international tour is produced by Judy Craymer, Richard East, and Björn Ulvaeus for Littlestar in association with Universal, Stage Entertainment, and NGM. It is presented in Manila by Lunchbox Theatrical Productions, Ticketworld, and Concertus Manila.

You can buy tickets HERE!