Based on Hans Christian Andersen’s The Princess and The Pea, Once Upon A Mattress is a very, very old show. So old in fact, that Carol Burnett (Miss Hannigan from the 1982 film) originated the role of Princess Winnifred back in 1959 (she also plays the role of Queen Aggravain in the 2005 movie). Don’t let the material’s age bother you, as Once Upon A Mattress proves to be a classic that is magnetic, full of silly laughs, and some outrageous numbers. With a book by Jay Thompson, Dean Fuller and Marshall Barer, ‘Mattress’ is full of witty, classic American humour and charm. Mary Rodgers music, accompanied by Marshall Barer’s lyrics, are just delightful. Though the show does have a few songs that hinder its flow and feel like filler.

(WATCH: Once Upon a Mattress’ Star-studded Cast Sings 12 Songs from the Musical!)

Upon entering the theater, one immediately notices the bars of blacklight sitting on the edge of the stage. This gives the impression that colourful glow-in-the-dark elements will be utilized in the show, and though they are, the end result is frankly underwhelming. The show starts with a group of school girls running around briefly onstage. One girl, dressed differently from the others, sits in the middle of the stage and pulls out a book as she begins to sing about the tale of The Princess and The Pea. This is when the black light comes into play, as cast members adorned all in black, carry around cardboard cutouts of various elements from the story. This could have been a very interesting and entertaining wait to start the show, but due to the brightness of the surrounding lights, the effect falls flat. Although it seems like the character of the girl is there only to introduce us to the story, she is present throughout the show, and even interacts with some characters. The character seems completely out of place, and the interactions with the rest of the characters come off as inorganic and even awkward at times. Oddly enough, the actress and character aren’t listed in the show’s program, and there’s no trace of the character to be found in the show’s decades-long history.

The villain here is neither a dark wizard nor an evil witch, but instead comes in the form of a soon to be mother-in-law: Queen Aggravain (Emeline Celis-Guinid), who will stop at nothing to make sure her dear son, Prince Dauntless (Niño Alejandro), remains single. When the story begins, a princess is being tested by the court, to see if she is eligible for the Prince. But this is not yet our princess; this is Princess No. 12 (Sweet Samaniego Buchanan), and she ultimately fails. This drives the people mad, as there is a law all throughout the land that states no one can marry until Dauntless is wed, and this creates conflict for two other characters: Lady Larken (Yanah Laurel) and Sir Harry (Hans Eckstein), who are expecting a child. Desperate to find a suitable bride for Dauntless, Sir Harry goes on a mission to the far corners of the kingdom. He eventually returns, but things don’t go as planned when Princess Winnifred (Carla Guevara-Laforteza) appears atop a parapet, having swum across the castle moat.

Carla Guevara-Laforteza is a powerhouse as Princess Winnifred The Woebegone. From her very first number (Shy), it is clear that heaps of energy is required from actresses playing Winnifred, but Laforteza ups the ante with her incredible vocal chops and physicality, and sets the bar very high with her comedic timing.

Emeline Celis-Guinid’s Queen Aggravain is deliciously nasty and hilarious at best, though her performance is a little inconsistent. While she has an incredible voice, her performance is held back by her accent, which flits from british to american south, and somewhere in between.

Yanah Laurel’s Larken and Hans Eckstein’s Harry are the show’s real lovers, and the pair’s chemistry is palpable, especially in the delightful number In A Little While.

The show tries to establish emotional connections with the characters of the Minstrel (Chino Veguillas) and the Jester (Steven Hotchkiss), who frequently mention their fathers. The Minstrel uses this to his advantage later on in the show, but all it does for the Jester is give him an excuse to break into a dance number (albeit a charming tap routine). The big twist is unfortunately rather anticlimactic, due to its execution. In this staging, we see the little girl sitting atop the mattresses, handing the weapons down to the Jester and Minstrel, but we don’t see that the weapons were hidden underneath the mattress. It is revealed through song that the Jester placed weapons underneath the mattresses, and those are what caused Winnifred so much discomfort.

The music arrangement by Pipo Cifra is lovely, though the show could certainly benefit from the use of live instruments. The set design is minimal, at least for a show that takes place in a medieval castle, but the designs are just the right amount of resplendent. Kayla Teodoro doubles as the show’s set designer as well as costume designer, and it is the costumes that truly stand out. From the Queen’s signature over-the-top outfits, to the Jester’s plush get-up, the costumes make the show a visual treat. Direction is very good, and despite the issues with some of the material and the questionable addition of the little girl character, Steven Conde has crafted an enjoyable show. Ultimately, Once Upon A Mattress has a few slow moments, but the toe-tapping tunes, all star cast and electrifying performance of Carla Guevara-Laforteza still make the show worth watching.

Next Review: 'Vanya and Sonia and Masha and Spike'- Vivid and Stirring and Masterful and Smart 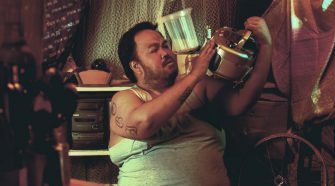 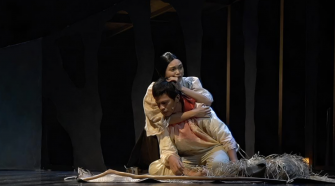 REVIEW: ‘²Bayani’ is a Bonifacio text book set to music 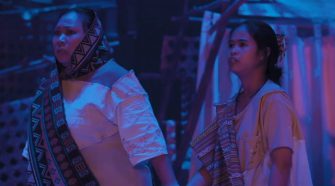