[This is the second of our two-part feature from our TFM Giveaway lunch with Ms. Menchu Lauchengco-Yulo. You can read part 1 here.]

When we were running our 10 for 10k Giveaway, we were pleasantly surprised to discover how competitive theater fans could be! Our eventual grand prize winner was certainly no exception. In fact, we first met Ms. Fatima Leana Mercado when the contest was still ongoing. Our app was giving her a few hiccups and she contacted us to make sure all her points were still being sent in. Now that’s dedication.

True enough, her persistence paid off. We asked her how she felt when we contacted her with the news of her win. “Winner’s high. I was super happy to have won and felt very excited to receive my prize.”

We were all really nervous during our lunch with Ms. Menchu, but she quickly put our nerves at ease. Since none of us have ever performed or have ever been involved with a production backstage, she satisfied our curiosity by giving us an inside look into the theater world.

She talks about rehearsal days, how local companies get creative when faced with budget constraints, and how actors maneuver their schedules to be able to survive in the industry. She also talks about interesting Broadway facts- how reviews from The New York Times can make or break a show, and how new productions are being staged from conceptualization until opening night.

She also talks about how Philippine theater was back in the late 70’s to the early 80’s. Rep was the only English-speaking theater company that time (which happens to be as old as PETA), and it functioned as a repertory company. This meant that there was a core of actors who did everything.

“We would be rehearsing at noon and then rush off to a matinee. Or we finish a matinee, rehearse [for another show] in between matinee and evening, and do the evening show. We went through that. That’s how we were trained.”

She remembers that there were 2 seasons a year, with 5 shows running one after the other per season. There were no alternates, nor understudies. They all still had to perform whilst being sick. And no one was exempted from being screamed at, whether it was Audie Gemora, Lea Salonga, Monique Wilson, or the late Junix Inocian. To this day, they all remain very disciplined because they had to learn the hard way.

How has the audience evolved from the 80’s?
“The theater-going crowd in the 80’s was not as big as the theater-going crowd now. I think a lot of awareness came with Saigon. People really knew about theater. That was the time we didn’t have internet. To watch a New York show, you had to go to New York. There was no such thing as YouTube. There wasn’t a lot of social media. It was a very small market that would go to Insular Life regularly and watch theater. Now it has really boomed. The perfect example of that is how every single theater company has a summer workshop and the kids just go. There was no such animal in my time. If you wanted to study, you go abroad.”

“Now everyone wants to be the next Kim, or the next Elphaba. And I think social media helps a lot. It’s so much easier now with technology.”

She mentions that there was a Theater Arts Program in UP, but she lived all the way in Pasay. Her parents didn’t want her traveling so far away.

We also asked her about her role as Artistic Director of Resorts World Manila. This daunting task makes her in-charge of everything artistic together with her co-artistic director, Michael Williams- from the show selections, to the visions for the seasons, to choosing the director and the creative team.

Is it easier to act or to direct?
“It’s less stressful to act because you only think of yourself. You just have to deliver what you’re hired to deliver. But as a director, I always felt that if anything goes wrong, it’s my fault. If an actor fails, it’s my fault. I always take the blame, so there’s a lot of pressure on me.”

She expounds on this when she talks about how difficult it was to direct Jekyll and Hyde. Because the show was dealing with an unpolished script and a not-so-stellar Broadway run, she decided to deconstruct the show by making innovative and calculated decisions in terms of the set, the blocking, and the costumes. All the effort was worth it because she turned it into a surprise hit.

“I like the challenge of a director. You lie down, you’re trying to sleep, and then an idea hits you, so you get up and then you write it because you might forget. My husband used to go crazy! (laughs) You don’t stop, especially when you’re rethinking it. You’re not presenting it as written. You have to make everything make sense.”

Can actors really see the audience?
“No. You only see the front row because the light blinds you. So you only see maybe the 1st 2 rows, depending how close.” They can easily get distracted with lights from cameras and phones.

We even learned about the different kinds of sets.
“With a stylized set, it’s conceptual. Everything is just one platform and it became everything. A realistic set is an actual room, with an actual bed. It’s the real thing with the real doors. Next to Normal was stylized. Anything that is not real is stylized. It just gives you a hint of it. It’s more creative, unless you really have the money or your story requires the real set.”

She even explains the differences between a proscenium theater and a non-proscenium theater. She demonstrates this visually by using two drinking glasses. The glasses represented the framework of a proscenium on stage. Everything in front of that up until the first row of seats is called an apron. Apparently, these really affect the way an audience can perceive a production. None of us ever even knew how crucial such technical things could be.

Does she have any favorite local productions?
“I love Katy and Larawan. I love Rama Hari. I love the music. There’s a lot of good Filipino musicals. I love Rak of Aegis. It’s just so much fun! I’m very excited about their new musical, the Francis M musical.”

If we didn’t have the constraints of time, I felt like we could’ve gone on endlessly. It was both eye-opening and enlightening to be able to see what goes on behind the curtains. Thanks to Ms. Menchu, the next time we see a production, we would be watching it with a fresh set of eyes.

Our winner Fatima also had this to say about the whole encounter:
“It was such an unexpected and amazing experience. Ms. Menchu truly inspired me beyond words. She is a treasure trove of theater facts and other stuff. 😉 Meeting her reignited my passion for theater, not just as a part of the audience, but going beyond what goes around behind the curtain. Thank you TFM for the opportunity. God bless the team :)”

This was truly a one of a kind experience. We’d like to thank Ms. Menchu Lauchengco-Yulo for agreeing to do this. Maybe when TFM reaches the next milestone, we can arrange for something similar again.

Previous REVIEW: "The Horse and His Boy" 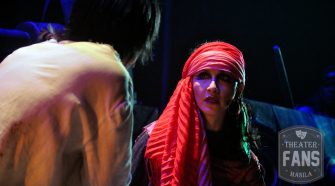