Lin-Manuel Miranda truly knows how to make every theater fan’s dreams come true. In this edition of Ham4Ham, 3 of Broadway’s biggest musicals come together to give the people a performance of a lifetime. Rory O’Malley, The Book of Mormon alum who currently plays King George on Hamilton, sings The Book of Mormon’s “Turn it Off”, while Broadway heartthrob Aaron Tveit sings Next to Normal’s “I’m Alive”, the musical where he originated the role of Gabe. All this while Miranda plays the tambourine.

Ham4Ham is a lottery hosted by Hamilton creator and star Lin-Manuel Miranda. Unlike the usual show lottery, Lin-Manuel holds special mini-shows featuring members of the cast, and prominent Broadway stars. In this edition, Miranda announced that Rory O’Malley will be taking his place as the host of this much-anticipated event. 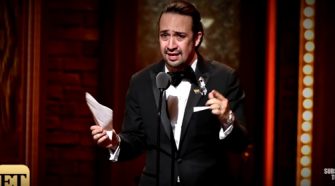