BBC will once again team up with Weinstein Co., for a six-part mini-series on Victor Hugo’s Les Misérables, Deadline reports. This is following their successful collaboration on another literary classic, Tolstoy’s War and Peace.

Andrew Davies, BAFTA fellow, who has a long list of credentials specializing on adaptation of classics (including War and Peace), will be writing the script.

The TV Movie, Davies says, will focus on the book, and will indeed be different from the musical that has recently concluded its run in the Philippines.

Of the musical, Davies says, “Most of us are familiar with the musical version which only offers a fragmentary outline of its story.” The TV movie promises to delve deeper into Jean Valjean and Javert’s layered relationship. “I am thrilled to have the opportunity of doing real justice to Victor Hugo at last by adapting his masterpiece in a six hour version…”

#LesMiz has been performed in: 349 cities, 44 countries and in 22 languages! How far have you travelled to see the show?

I don’t know about you, but watching Les Misérables as a six-hour mini series could be promising! I just hope that I won’t start breaking into song, on my own. 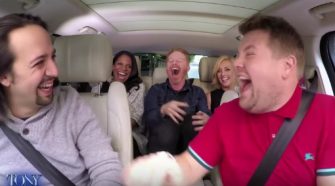