Ely Buendia, in a Facebook post, spoke out against the “culture out there, not just in entertainment, that somehow makes it okay to take credit, and be rewarded, for someone else’s work.” 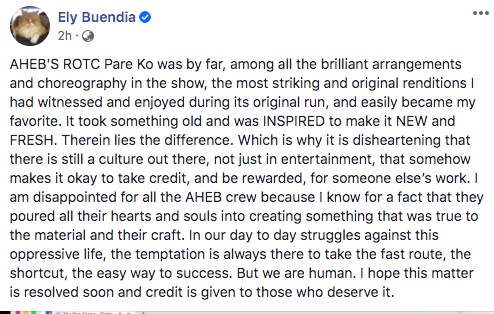 The Eraserheads frontman was referring to an issue first raised by Myke Salomon, Musical Director of ‘Ang Huling El Bimbo’, on Twitter wherein a music competition contestant won P1,000,000 and a 1 year management contract for a video that is said to have “copied/ripped-off our musical arrangements” according to Salomon’s tweet.

A guy copied/ripped-off our musical arrangements for #AngHulingElbimboMusical (musical treatment, concept) without permission won in that pop stage contest for his final round. He won 1million and an artist contract. I feel bad for the other contestants. 👎

The video in question was submitted by CJ Villavicencio for The Pop Stage, a contest by Popeyes in cooperation with Viva Artists Agency.

Buendia specifically mentioned the musical’s arrangement of hit song ‘Pare Ko’, saying that it was “by far, among all the brilliant arrangements and choreography in the show, the most striking and original renditions I had witnessed.” and continued by saying, “It took something old and was INSPIRED to make it NEW and FRESH.”

He lamented his disappointment for the people behind the musical: “In our day to day struggles against this oppressive life, the temptation is always there to take the fast route, the shortcut, the easy way to success.” and ended his post by hoping that the matter be resolved soon, “and credit is given to those who deserve it.”

Previous WATCH: Lea Salonga, Sierra Boggess, Sing "On My Own" with Claude-Michel Schönberg

Next 'Pamanang Pahina' is a New Theater Show for Young Audiences