Original works, stage adaptations, and festivals are some of the things that you can watch from our university, independent, and community theater groups this December.

1. The Dreamweavers by FEU Theater Guild 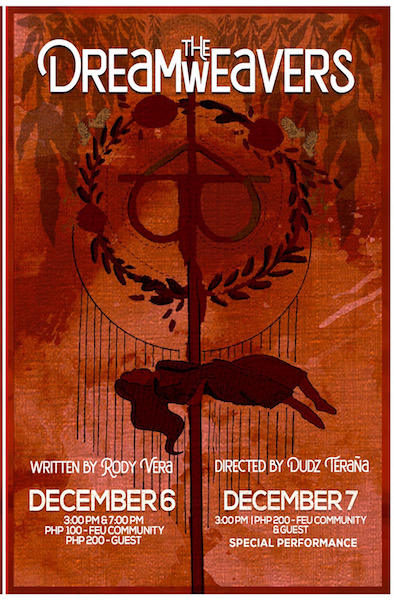 The FEU Theater Guild, which celebrates its 85th season, is staging Rody Vera’s The Dreamweavers from December 6-7 at the FEU Auditorium.

The play tells the story of three weaver friends, Libay (Divine Aucina), Bon (Cristine Calawod), and Evelyn (Karyl Oliva) through the eyes of a Dutch tourist (Meann Espinosa). The three young girls, filled to the brim with dreams of a better life than what they were currently living in, unfortunately had to part ways to adapt to the demands of the times. Bon had to serve as a maid even at such a young age to a rich family; Evelyn had to migrate to the Netherlands to look for better opportunities; and Libay attempted to enter the textile business to provide for her family.

Before they separated, they divided a piece of cloth into three and promised each other to sew into the cloth every important life event that happened to them so that they could update each other when the time comes for the friends to meet again.

The show is directed by Artistic Director Dudz Teraña. You can reserve tickets by following this link. 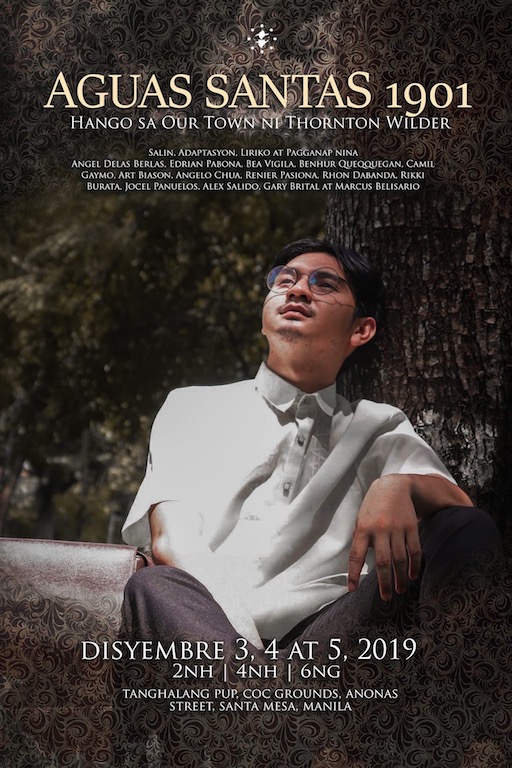 An adaptation of Thornton Wilder’s Our Town, the production is a three-act play with music set in the year 1901 in a fictional town in Los Baños, Laguna called Aguas Santas. The first act focuses on the daily lives of the townspeople, the second on love, marriage, and unity, and the third, on death. It is directed by Bunny Cadag.

Aguas Santas 1901 will run from December 3-5, 2pm, 4pm, and 6pm at the Tanghalang PUP, COC Building, Anonas St., Sta. Mesa, Manila. Sining-Lahi Polyrepertory is the resident theater organization of the Polytechnic University. It celebrates its 39th year this year.

3. Somewhere Else Instead by Langgam Performance Troupe 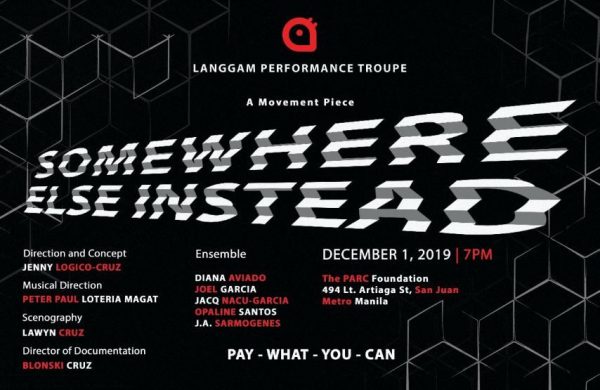 Somewhere Else Instead (taken from a line of AA Milne’s poem, “Halfway Down”) is a movement piece that centers around the image, utility, and metaphorical significance of the staircase. Developed and devised for over a year, the performance project conducts and incites an ensemble of five performers into an unraveling process that reveals the relevance, impact, and influence of the stairs from the architectural to the metaphysical. It is conceptualized and directed by Jenny Logico-Cruz.

The Langgam Performance Troupe is a contemporary performance company focusing on experimental, process-based, and practice-as-research works. The show will run on December 1, 7pm at the Black Box Theater of The PARC Foundation.

4. Under the Stars by the Ikarus Theatre Collaborative 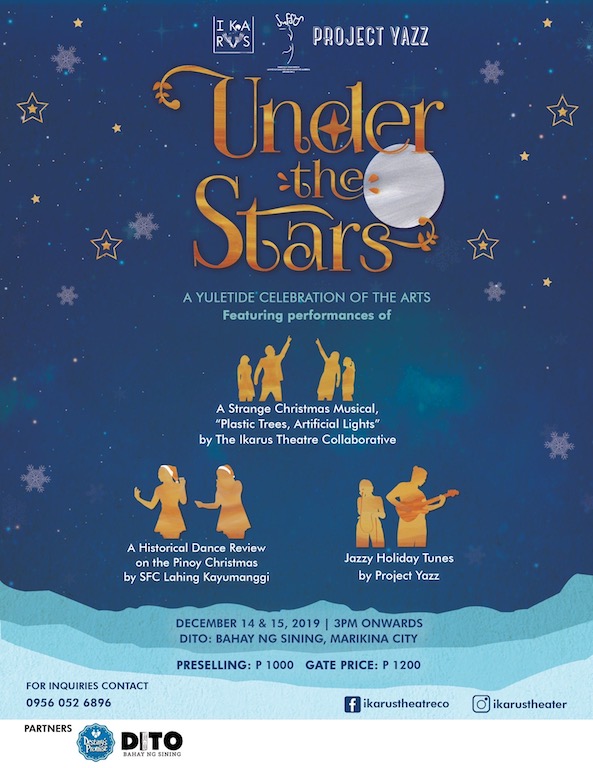 Under the Stars is a coming together of the story of the Nativity, the story of art, and the story of our truths. Performers include the Simeona F. Chanyungco Lahing Kayumanggi Mananayaw ng Marikina Dance School, Project Yazz Jazz Duo, and actors from the Ikarus Theater Collaborative. The show is directed by Jay Crisostomo IV, who also wrote the short play with music. Music for the play entitled, Plastic Trees, Artificial Lights, is a collaboration between Jay Crisostomo IV and Project Yazz.

The Ikarus Theater Collaborative is the official theatre group of DITO: Bahay ng Sining. It is a Marikina-based performance company which specializes in new and untested material or innovative takes on classic texts. For ticket inquiries, contact 0956-0526896. 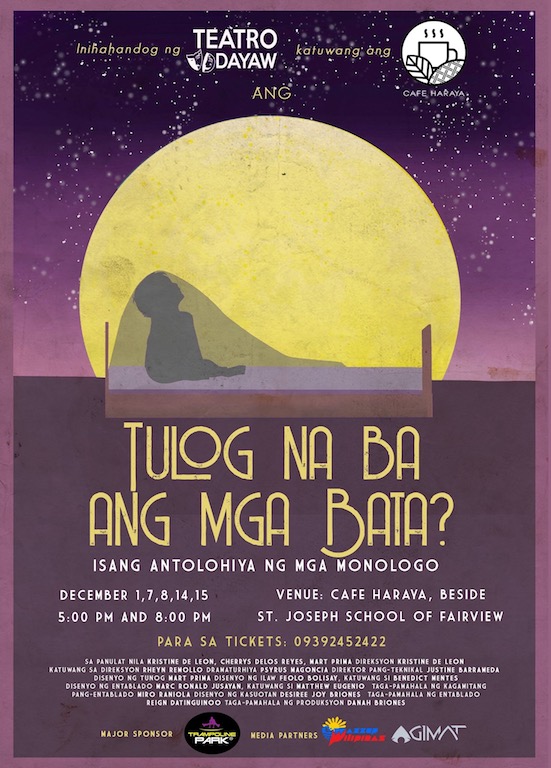 Teatro Dayaw, a non-profit community theater organization established in 2018, presents an anthology of monologues written by its members. The production is based on true stories focusing on what keeps people up at night. 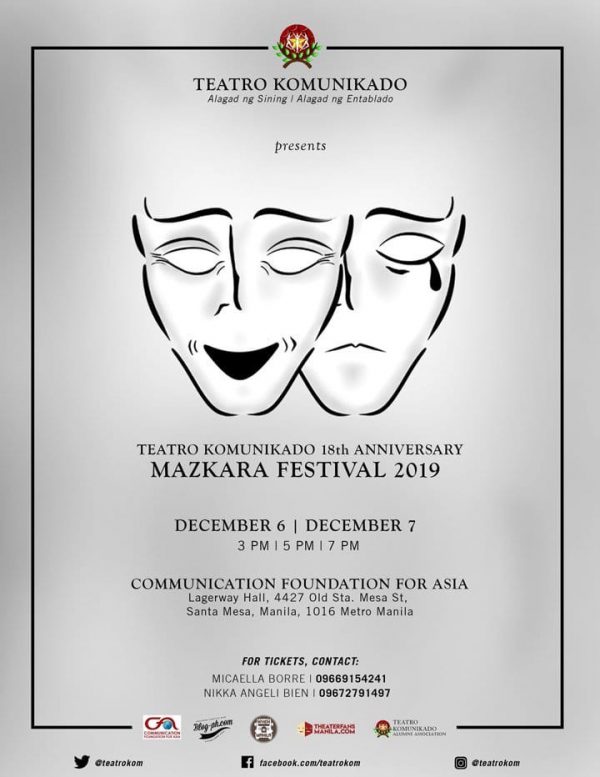 The Mazkara Festival, featuring two original plays (Pamana and Yin and Yang) and one adaptation (Ang Bastos), will run from December 6-7 (3pm, 5pm, and 7pm) at the Lagerway Hall, Communication Foundation for Asia, Old Sta. Mesa street, Sta. Mesa Manila. The festival serves as the culminating activity for the members and workshoppers of Teatro Komunikado, the premier theater and production organization of the PUP- College of Communication.

Pamana tells the story of three siblings mourning the loss of their mother who left them with a mystery box that turns out to be her last will. Yin and Yang is about a crime investigation involving a husband who was found dead in a motel’s rooftop, where the wife is the prime suspect. Ang bastos is an adaptation of Anton Checkhov’s The Boor. It is about a debt collector trying to persuade a woman to urgently pay the debt of her late husband.