On September 21, 1972, President Ferdinand Marcos signed Proclamation No. 1081, declaring Martial Law in the Philippines. What followed was one of the most traumatic periods in our country’s history marked by a record number of human rights violations including numerous extrajudicial killings. Democracy came under attack with fundamental freedoms, particularly the freedom of expression, severely curtailed. All those who dared express dissent against the regime were tortured, summarily executed or even “disappeared” under dubious circumstances.

Nearly five decades later and the spectre of the Martial Law era continues to haunt our society with eerily familiar socio-political upheavals playing out regularly even as the country struggles to survive in the midst of a global pandemic. Once again, democracy and the freedom of the press have come under threat and dissenting voices are being effectively silenced.

Many Filipino playwrights have created works to honor those who sacrificed their lives to liberate the country from dictatorship. These plays and musicals serve as a stark reminder that the nation must never again return to such turbulent times.

Here is a sampling of 10 plays and musicals that pay tribute to the fight for freedom and justice:

1. “Pagsambang Bayan (Liturgy of the Masses)” by Bonifacio Ilagan

The play is structured like a Roman Catholic Mass, integrating socio-political issues with a religious ceremony. The Mass attendees represent different sectors of society such as peasants, workers, students, tribal minorities, urban poor, and professionals, all communicating their plight to the priest. The priest begins the play as an impassive observer but is subsequently radicalized and actively joins the fight for freedom. Originally a play performed in 1977, the piece was revived as a musical 40 years later.

The musical was adapted from the Lualhati Bautista novel of the same name, with music and lyrics by Valera and Matthew Chang. The show follows the lives of the Bartolome family who are caught in the tumultuous decade full of significant events such as the Plaza Miranda bombing, the suspension of the writ of habeas corpus, and the unlawful arrests of political prisoners. Amanda Bartolome, the matriarch of the family, witnesses the radicalization of more and more people in response to the oppressive nature of the Marcos regime.

First staged for the People Power Experiential Museum, this one-act play explores the tragic fates of Lorena Barros, Macli-ing Dulag, Edjop and Evelio Javier. The play is a brutal account of the unspeakable horrors these activists endured at the hands of their torturers before perishing in the name of justice and freedom.

Adapted from Lualhati Bautista’s novel of the same name, the play follows the lives of Anna and Roy, two rebels who fought the injustices of Martial Law and who struggle to navigate life after the 1986 Revolution. While they search for Anna’s daughter from a first marriage and contend with the daughter they estranged during their NPA years, they must also reconcile themselves with the guilt over those they lost and betrayed in their battle to liberate the nation.

First staged at the Virgin Labfest XII, this play explores the complex relationship between a Loyalist mother, excited about the return of Imelda Marcos to the Philippines, and her activist son, who tries to convince her that her idol was a perpetrator of countless atrocities. This intergenerational conflict over political beliefs is a familiar one to many and the play deftly tackles the tricky balancing act between staying true to one’s political convictions and somehow sustaining familial bonds.

6. “A Game of Trolls” by Liza Magtoto and Vincent de Jesus

The musical follows Hector, a professional keyboard warrior who works for Marshalls of History, a troll center who is running a pro-Martial Law campaign. After relentlessly trolling the victims of the oppressive regime, Hectors is “visited” by the Ghosts of Martial Law from the Internet Cloud, reminding him of their struggles to liberate the country from dictatorship. These stories force Hector to re-evaluate his involvement in the trolling business and to also re-examine his relationship with his mother, Tere, a former Martial Law activist.

This rock musical interweaves the stories of two youth leaders, Edgar Jopson (Edjop) and Evelio Javier. Though they never met in real life, both worked towards ending the authoritarian regime of Ferdinand Marcos and both died for their cause. Edjop was the former president of the National Union of Students and Javier was an Ateneo law graduate who served as governor of the province of Antique. The former advocated armed struggle while the latter preferred parliamentary reform. The play brings the two EJ’s together in the afterlife so they can reflect on and remember the struggles they endured in the name of freedom.

The play follows several seemingly unrelated stories which nevertheless intersect at a crucial juncture in Philippine contemporary history – the height of the anti-dictatorship struggle. Five scenes feature various characters including a farmer, an urban worker, a priest, an Itawes woman, a socialite, a wife, a student activist, a policeman, and a student. Despite their diverse backgrounds, all discover the common thread of humanity and a profound desire for a more just society.

The play centers around a group of construction workers billeted at a construction site for a certain film center who discuss their plight as below minimum wage earners from the Martial Law era to the present. Security guards occasionally join the conversation as they all ponder whether there are better prospects outside and whether they should stay or go. This piece won the second prize at the 1989 Don Carlos Palanca Memorial Awards for Literature. 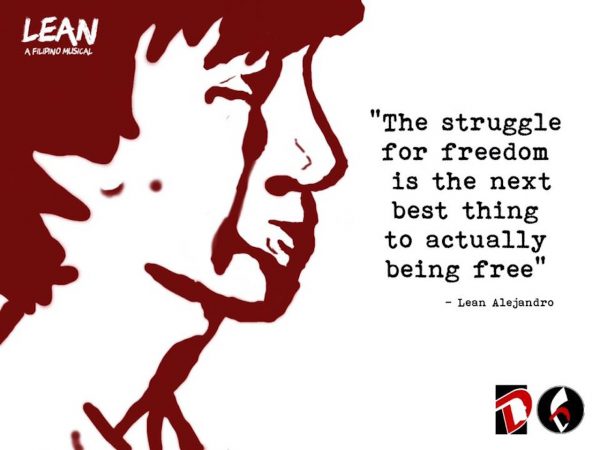 The musical pays tribute to the life of UP student leader Leandro Alejandro who actively fought against the Marcos regime in the 1980s. On September 19, 1987, Alejandro was gunned down on his way to the headquarters of the left-wing organization, BAYAN. He dedicated his life to advocating national democracy, speaking in mass demonstrations, writing articles, and discussing social issues inside the campus and in urban poor communities.

Next "Guadalupe" Musical to Stream Online